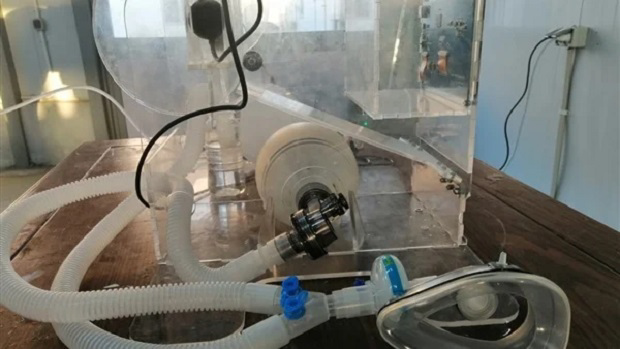 A research team at Tanta University just completed a project to manufacture the first Egyptian ventilator made entirely from locally sourced materials to help the government fight the ongoing coronavirus pandemic.

President of Tanta University Dr. Magdy Sabaa made the announcement in an official statement that the university has been undergoing this project since the demand for ventilators began to exceed availability amid the increasing COVID-19 case count.

Considering the fact that the novel coronavirus is a respiratory illness, ventilators have become an invaluable apparatus that can save many lives by allowing them to breathe artificially as they recover from the virus.

And indeed, until now, the cause of death in most of the deceased COVID-19 patients has been due to pneumonia or the pooling of fluids in patients’ airways, making it extremely difficult for them to breathe, leading to complications that result in death.

Sabaa further revealed that the new ventilators were a joined effort between the departments of medicine and engineering at Tanta University, and they are the answer to the increased prices and reduced availability of imported ventilators.

Dr. Mohamed Zaki, the Dean of the Faculty of Engineering at the university reveals that the new device works through the operation of turbines that generate air rich in oxygen that flows into a filter and then through pipes into a patient’s respiratory system, essentially breathing for them. On the device are also sensors that control the air pressure as well as inform users when the oxygen levels in the tank are low. Each patient will require a different amount of pressure based on how severe their bout with the illness is, and this is controlled by the device as well.

Zaki also said that the project was initially meant to be a maintenance project to repair 5 imported ventilators that had been imported from Europe, the team first outlined the issues with the devices then they worked on acquiring spare parts needed to get the devices up and running. After 4 of the 5 devices were operational again, the team pitched the idea of manufacturing their own local version to Sabaa, who devised a plan to have a ventilator made that would adhere to international standards.

After studying what they would need to kick off the new project, the team began brainstorming mechanical alternatives for the parts of the ventilator not available in Egypt. The team is currently in the process of assembling the new device and should be finished with this task in a few days, at which point they will enter the final phase of testing the device and implementing quality control guidelines.

Zaki asserts that the device will be completed in a matter of days to meet the demands of hospitals nationwide, where 10% of COVID patients are in dire need of a ventilator. He also revealed that manufacturing the device will cost a quarter of the price of its imported counterpart and is of equal