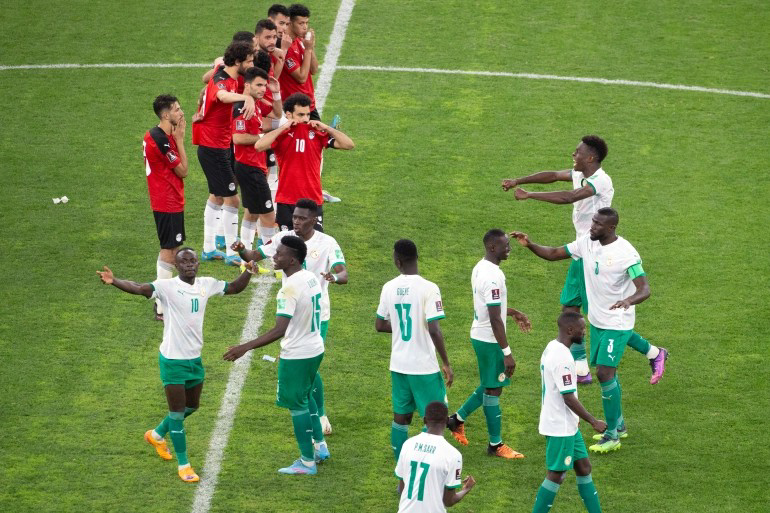 The Egyptian Football Association (EFA) has submitted an official complaint against Senegal saying its national team was subjected to racism and intimidation as it was preparing to play in the World Cup playoff.

In a statement on Instagram on Tuesday, the EFA said its team “was subjected to racism after offensive banners appeared in the stadium stands directed at the players, specifically Mohamed Salah, the team captain.”

It added that fans terrorised the players by throwing bottles and stones at them during the game’s warm-up sessions.

“The Egyptian team’s buses were attacked, which resulted in their windows being broken and in injuries to some individuals,” the statement also read.

The association said it was submitting the complaint to the Confederation of African Football (CAF) and the Fédération Internationale de Football Association (FIFA).

In the post, EFA shared an image of the shattered windshield of the bus.

FIFA said in a statement to Sky News Sports that it was “currently in the process of analysing the official match reports of the FIFA World Cup qualifier match between Senegal and Egypt”.

“The relevant information included in the match reports will be evaluated by the competent disciplinary bodies before deciding on the next steps to be taken.”

Dakar’s Stade Me Abdoulaye Wade stadium was filled to capacity as Sadio Mane sent his country to the World Cup after Senegal beat Egypt 3-1 in a penalty shootout after their playoff ended 1-1 on aggregate.

Senegal’s victory, with Mane hitting the winning spot-kick, was a repeat of the Africa Cup of Nations final last month when Mane clinched a first major title for his country by also scoring the winning penalty in a shootout against the Egyptians.

There was more pain for Salah, who missed Egypt’s first penalty in this shootout and again had to watch as Mane celebrated a major victory.

There was widespread criticism online regarding green lasers directed from the crowd in the faces of the players during the game. Those lasers were notably seen on Salah prior to him missing his penalty.

According to the BBC, the Senegalese Football Federation president said he would await official reports on the incidents.

“From the stands, I didn’t pay attention to the projectiles thrown,” Augustin Senghor said. “About the lasers, if it happened this is a first in Senegal. But we know that in Cairo there were a lot of these and [they are used] often in specific countries. Senegal isn’t used to that