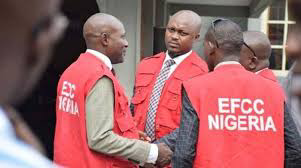 Operatives of the Economic and Financial Crimes Commission (EFCC) are currently at the venue of the presidential primary of the ruling All Progressives Congress.

A special convention to elect a presidential candidate for the APC in the 2023 general election is ongoing at Eagle Square in Abuja.

Although voting had yet to start as of the time of filing this report, EFCC operatives were seen monitoring the conduct of participants at the presidential primary.

This comes as reports of delegates’ inducement to the tune of about $40,000 by major contenders in the ongoing presidential primary elections are making the rounds.

The anti-graft agency had come under intense criticism some days ago when its officials appeared at the presidential convention of the opposition Peoples Democratic Party (PDP).Some Nigerians had described the EFCC’s action as a move to embarrass the opposition.

However, the personnel of the agency on Tuesday in their red jackets were seen inside the Eagle Square, monitoring proceedings

PREVIOUS POST Pick one of us, Okorocha, other South-East aspirants write Buhari
NEXT POST Aspirants reduced to Osinbajo, Tinubu – Gaya