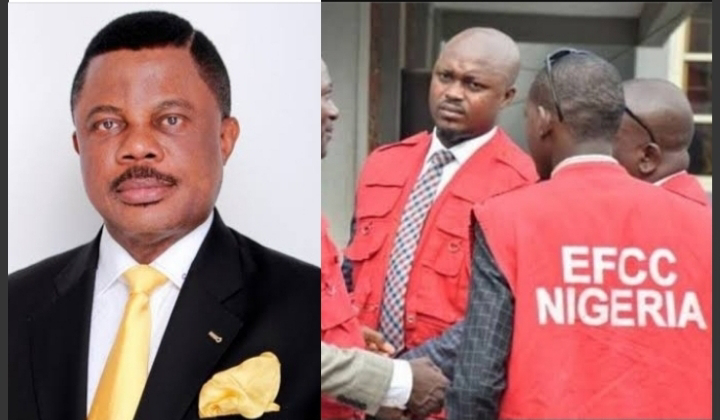 After spending four nights in its custody, the Economic and Financial Crimes Commission, EFCC, has granted administrative bail to the immediate past governor of Anambra State, Willie Obiano.

EFCC chairman, Abdulrasheed Bawa, who disclosed this to journalists on Monday in Abuja said the former governor was cooperating with the commission to perfect the bail conditions.

According to him, there was nothing political about the former governor’s arrest.

“There is nothing political about the investigation. You know what the EFCC stands for,” Bawa said. “We investigate crimes, we look at people that have committed crimes and we link it up together and then we go to court. That is all we have been doing and that is what we will continue to do.

“We have been accused of media trial. But we will continue to do our investigation professionally.

“He has been granted bail and we are waiting for him to perfect his bail conditions he has been cooperating with us and everything is going on well,” he said.

Obiano was arrested on Thursday at the Murtala Muhammed International Airport, Lagos while trying to board a flight to Texas, United States.

The EFCC had in November last year placed the former governor on a watchlist.

In a letter to the Comptroller General of the Nigeria Immigration Service dated November 15, 2021, the Commission requested the Service to place the governor on a watchlist and inform it anytime he is travelling out of the country from any of the International airports and other points of entry and exit.

The guardian gathered the former governor was arrested for misappropriating N5bn Sure-P and N37 billion Security Vote funds, which was withdrawn in cash.

Part of the funds was also allegedly diverted to finance political activities in the state.