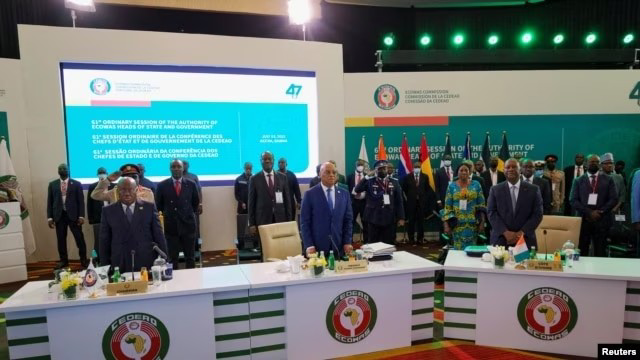 The Economic Community of West African States (ECOWAS) on Sunday said it will immediately lift economic and financial sanctions placed on Mali and Burkina Faso.

The leaders of the bloc who met on Sunday for the 61st Ordinary Session of the Authority of Heads of State and Government, according to Al Jazeera, agreed to lift the sanctions after military rulers of both countries proposed a 24-month transition to democracy and published a new electoral law.

According to Al Jazeera, ECOWAS Commission President Jean Brou told a news conference on Sunday that the sanctions will be lifted immediately. Borders with Mali will reopen and regional diplomats will return to Bamako.

“However, the heads of state decided to maintain individual sanctions, and the suspension of Mali from ECOWAS, until the return to constitutional rule,” Al Jazeera quoted Kassi Brou as saying.

Leaders of the regional bloc gathered to assess efforts to secure timetables and other guarantees for restoring civilian rule in Mali, Guinea and Burkina Faso.

Mr Kassi Brou said that after a protracted discussion with the coup leaders in Burkina Faso, a new proposal for a 24-month transition was more acceptable, after the heads of state rejected a proposed 36-month transition.

In Guinea, however, there seems to be no resolution in sight as the military government has refused an ECOWAS mediator and announced a 36-month transition – a period that African Union Chairman and Senegalese President Macky Sall has described as “unthinkable.”

The three-year transition period was rejected by ECOWAS leaders. They told Guinea’s military to propose a new timeline by the end of July or face economic sanctions.

The heads of state appointed Benin’s former President Boni Yayi as a new mediator and urged the Guinean military government to work with him and quickly propose a new timetable.

“Beyond that, economic sanctions will be imposed,” Mr Brou said.

The effect of the sanctions were deeply felt in Mali as it crippled the country’s economy, raising humanitarian concerns amid widespread suffering. The country defaulted on more than $300 million of its debt due to the sanctions, which cut it off from the regional financial market and the regional central bank.

The ECOWAS mediator in Mali, former Nigerian President Goodluck Jonathan, visited the country last week. A member of his entourage told AFP news agency that Mali had made “enormous progress”.

Mali’s top diplomat Abdoulaye Diop on Friday said the recent political developments were moving the country towards a lifting of the sanctions.