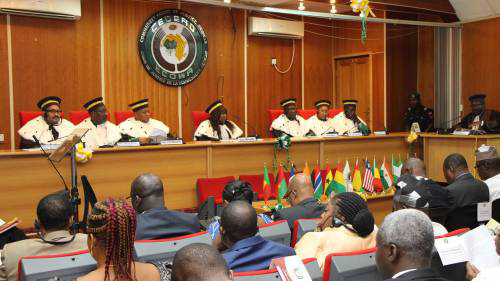 The ECOWAS Court of Justice has ordered the Nigerian government to amend Section 24 of the Cybercrime (Prohibition, Prevention, etc.) Act of 2015, seen as targeting journalists, social media users, and others.

The Socio-Economic Rights and Accountability Project (SERAP), a non-governmental organisation, had sued the Muhammadu Buhari-led government, challenging the legality and compatibility of the Section in relation to the guarantees enshrined in Article 9 of the ACHPR and Article 19 of the ICCPR.

According to SERAP, the section violates the rights to freedom of expression, information and other rights of activists, bloggers, journalists, broadcasters and social media users.

To support its case, SERAP listed 12 cases of harassment, intimidation, arrest, unlawful detention, prosecution and imprisonment by Nigerian and state authorities between August 2015 and November 2018.

The Buhari government urged the Court to dismiss the suit on the grounds that it was misplaced and unproven and the reliefs sought were not grantable in law.

Its lawyers contended that the application was not only pending before the national court for the same reliefs, but that the interpretation of Section 24 of the Act must be submitted to domestic courts and not the ECOWAS Court.

The respondent argued that the Act was not enacted to muzzle the freedom of expression but to curtail the activities of criminals using the internet.

The court, however, said the amendment would meet obligations under the African Charter on Human and Peoples’ Rights (ACHPR) and the International Covenant on Civil and Political Rights (ICCPR).

Delivering judgement in Ghana, according to Daily Post, Justice Keikura Bangura said the contentious Section was not in conformity with Articles 9 of the ACHPR and 19 of the ICCPR to which Nigeria is a signatory.

The court recalled that it had, in a plethora of decided cases upheld that mere allegation of human rights violation is sufficient to invoke its human rights mandate pursuant to Article 9 (4) of the Supplementary Protocol.

However, the claim of SERAP for compensation was dismissed as both parties were ordered to bear their costs pursuant to Article 66 of the Rules of the Court.

The court decided that proving a claim is imperative and without establishing evidence, “the violations suffered by those listed that resulted in a breach of the respondent’s obligations cannot procure a favourable judgment before this Court”.

“A claimant must support their claim with uncontroverted evidence which is of persuasive value to enable it to discharge its burden of proof,” Justice Bangura said.

Justices Gberi-Be Ouattara and Dupe Atoki were also on the panel that delivered the landmark verdict.