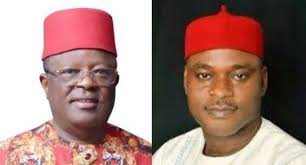 The Court of Appeal Enugu Division on Friday affirmed the judgement of Ebonyi High Court, Abakaliki, which quashed a suit challenging the defection of Governor David Umahi and his deputy, Dr Kelechi Igwe, from one party to another.
The suit was seeking their removal from office for defecting to the All Progressives Congress (APC) from the Peoples Democratic Party (PDP).

Governor Umahi and his Deputy had in November 2020 left the PDP, the platform on which they sought election and were elected, to the APC, citing injustice by the PDP against the South-East zone.

But the court in a unanimous judgement delivered by Justice A. O. Belgore, held that Umahi and his deputy have the right to move to any political party they so wish.

The court held that there is nowhere in the constitution which is the supreme law of the land, where a sitting governor is barred from defecting to another political party.

Other members of the three-man panel of Justices are Justice J. O. K. Oyewole and Justice S. N. Gbagi.

Senator Suny Ogbuoji and his running mate, Mr Justin Mbam Ogodo, the state governorship candidates of the APC in 2019, had through originating summons filed a suit at the state high court asking it to hold that the defendant, Umahi, having defected to the APC from the PDP, ought to vacate the office.
It asked that they (Ogbuoji and Ogodo) should be sworn in having come second in the election.

But Justice Henry Njoku of the Ebonyi State High Court dismissed the suit for lacking in merit.

Njoku ruled that having regard to section 188 (1) of the 1999 Constitution as amended, the defendants, Governor Umahi and Deputy, had not offended any provision of the Constitution or the Electoral Act in defecting to the APC.

The High Court further held that having regard to section 308 of the Constitution, it was even wrong to institute criminal or civil proceedings against the office of the Governor or Deputy Governor.

Dissatisfied with the judgement, the plaintiffs, Ogbuoji and Ogodo, on March 7, 2022, filed an appeal against the judgement, at the Enugu judicial division of the Appeal Court.

But the Appeal Court in affirming the ruling of the Abakaliki High Court, said that governor Umahi and his deputy did not offend any provision of the constitution or the Electoral Act, as there is no consequence under the law against the defection of the holder of the office of the President, Vice President, Governor or Deputy Governor, to another political party.

It further held that the defection of a political office holder may appear immoral, but it was not the duty of the Court to embark on an investigation or probe into the provisions of the laws, warning that judicial activism must not be turned into judicial rascality.

The Appellate Court further held that there is no provision in sections 180, 188 or 189 of the 1999 constitution as amended, that empowers the Court to remove either a sitting governor or the deputy.

According to the learned Justices, “defection of an office holder is not novel to Nigeria’s judicial jurisprudence.”

While dismissing the appeal, the court awarded the sum of N200,000 against the appellants.

Reacting to the judgement, Counsel for the Defendants, Roy O. U Nweze, applauded the judgement, saying, it would be a reference point across the country.

Also, the Appellant’s Counsel, Ogbonnaya Okorie, thanked the Justices for delivering the judgement, adding that he would study the judgement and advise his clients properly.
However, in another case, a Federal High Court sitting in Abuja had on March 8 ordered Umahi and Igwe to immediately vacate office as governor and deputy governor of Ebonyi State.

The court held that by defecting from the party on which they were sponsored and elected as governor and deputy governor of Ebonyi State to the APC, a political party that did not win the election, they had resigned or are deemed to have resigned from office.

The court, therefore, restrained Umahi and Igwe from parading themselves as governor and deputy governor of the state.

The court ordered the PDP to nominate candidates to replace Umahi and Igwe as governor and deputy governor of the state respectively.
In an originating summons marked FHC/ABJ/CS/920/2021, the PDP had principally urged the court to make a declaration that by defecting from the party on which they were sponsored and elected as governor and deputy governor of Ebonyi State to the APC, a political party that did not win the election, they had resigned or are deemed to have resigned from office.