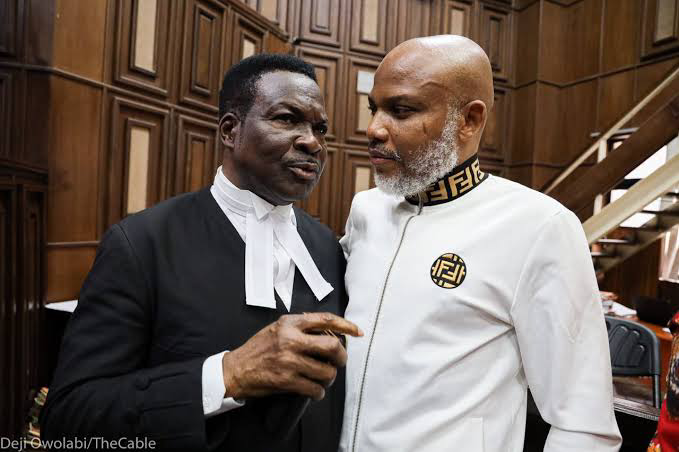 Chief Mike Ozekhome (SAN), counsel for the leader of the Indigenous People of Biafra, Nnamdi Kanu, has appealed to the President, Major General Muhammadu Buhari (retd.), to immediately release Kanu from detention through a ‘political solution.’

In a petition dated October 3, 2022, a copy of which was made available to The PUNCH on Tuesday, the lawyer urged Buhari to order the immediate release of Kanu by instructing the Attorney General of the Federation to wield his powers under Section 174 of the 1999 Constitution to enter a “nolle prosequi.”

According to him, the appeal is to enable Buhari to correct a long-standing travesty of the continued detention of Kanu by the Nigerian Government under cruel, inhuman and degrading conditions.

He noted that Kanu is currently standing trial at the Federal High Court for sundry offences, for which he was granted bail and he observed the terms and conditions of the bail until he was attacked by the men of the Nigerian Army.

He said, “It (the attack) was a state-sponsored assassination attempt on his life. As if that was not bad enough, Kanu’s subsequent sojourn in exile to seek refuge in London from where he travelled to Kenya, was brutally aborted on June 26, 2021, when he was savagely abducted, blindfolded, tortured and kept in solitary confinement for eight days in a secret location and forcibly brought back to Nigeria.

This was carried out arbitrarily without due process and recourse to the judicial systems of Kenya, the UK and Nigeria.

“In Kenya, Kanu was tortured and made to disappear and kept out of circulation and public view in a secret facility for eight days by Kenyan authorities. It was an illegal collaboration between the Kenyan and Nigerian secret agents.”

Ozekhome argued that Kanu’s continued detention violates all known laws and norms of both international and domestic laws, including Nigeria’s obligations under binding international treaties.

He noted a particular concern was the July 20, 2022 ruling of the United Nations Working Group on Arbitrary Detention which was adopted on April 4, 2022, at its 93rd session held on March 30 to April 8, 2022, adding that the report was issued after the Nigerian government had filed her reply to UN body’s communication on January 25, 2022.

He added, “Kenya did not reply to the 16-page report that indicted both the Nigerian and Kenyan governments for Kanu’s arrest and extraordinary rendition, torture and continued detention.

The UN Council urged the Nigerian government to ensure the immediate release of Kanu unconditionally. It was also ordered that he should be paid adequate compensation for the arbitrary violation of his fundamental human rights.

“The point must be emphasised that Kanu had travelled to Kenya using a British Passport. He has thus presented himself to the Kenyan authorities as a British citizen, and not a Nigerian citizen, or one with dual citizenship of Nigeria and the UK.

“To refuse to release Kanu unconditionally and immediately is to court international displeasure and the multi-faceted backlash, it will hurt Nigeria badly as it will also insinuate that Your Excellency does not subscribe to the rule of law and respect for citizens’ fundamental rights, and your postulations of the just ended United Nations General Assembly which took place between September 20 and 23, 2022.

“Your Excellency must avoid these unhealthy reactions by ensuring that Kanu is released immediately and unconditionally now. The moral burden of insisting on keeping Kanu in detention is too expensive and too offensive to embrace, especially with his fragile and deteriorating health condition which his custodians, the State Security Services, have not been able to manage properly. Do not let Kanu die in detention.”