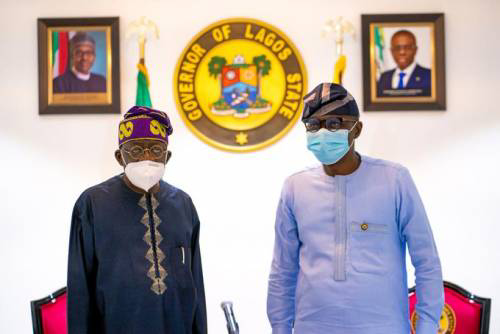 There is anxiety presently in the camp of Lagos State Governor, Babajide Sanwo-Olu, as his godfather and National Leader of the All Progressives Congress, Bola Tinubu, has been silent on in his (Sanwo-Olu’s) second term bid.

SaharaReporters learnt on Saturday from top sources in the party that Sanwo-Olu and his camp are presently worried about Tinubu’s indifference and much more after the state government is “heavily funding” Tinubu’s 2023 presidential ambition.

SaharaReporters gathered that Sanwo-Olu had been telling his inner circles that he was not happy with Tinubu’s body language and reluctance to give him a go-ahead for a second term, despite all the resources being pumped into his 2023 presidential campaign.

In 2019, Tinubu as always handpicked Sanwo-Olu, having rejected the then governor, Akinwunmi Ambode, who turned out not to be “a good son”. Ambode had put up a fight at the APC governorship primary against Sanwo-Olu’s candidacy.

At the present, it appears the table is turning and Ambode’s fate may be waiting for Sanwo-Olu whose second term bid does not appear to be a priority for Tinubu and his circle of Lagos kingmakers.One of the top chieftains in the party revealed that Sanwo-Olu’s camp is presently worried and doing all it can to curry the APC leader’s favour which includes pumping more state-owned resources into the “lifelong ambition” of the former Lagos governor.

“Tinubu is yet to endorse Jide Sanwo-Olu as governorship candidate. This is causing panic. The governor is worried. He is telling people that despite funding Tinubu’s candidacy, he’s yet to hear from him.”
“N1.7 billion monthly is siphoned through the Office of the Speaker (of the State House of Assembly, Mudashiru Obasa) alone to fund Tinubu’s campaign. The EFCC has transferred all the officers handling the Speaker’s case,” another source in the party said.

One of the avenues the governor will seek to explore will likely be the March 26 convention where his camp will ensure that Tinubu’s candidates emerge as the national officers.SaharaReporters earlier reported today that top sources in the party listed some names being considered for positions ahead of the March 26 National Convention.
Meanwhile, Obasa’s tenure as Speaker of the Lagos House of Assembly has been plagued by controversies.

For instance, SaharaReporters in October 2020 uncovered how Obasa fraudulently collected about N32.5m as travel allowance for himself and six others to attend a programme in Turkey.It was learnt that Obasa got the House to approve the fund to facilitate a trip to the European country to understudy the transformation of the Turkish parliament.

In a document sighted by SaharaReporters dated July 09, 2018, the Speaker had requested the Assembly to release the funds, so he could attend the summit along with six others.It was further learnt that Obasa embarked on the trip with only one lawmaker, the late Hon. Adebayo Osinowo, and pocketed the fund approved for the others.

A source close to the Assembly told SaharaReporters that the Speaker only travelled to Turkey for purchase of house furniture as the Turkish parliament had no record of him or the Lagos House of Assembly coming to the country for any fact-finding mission.“Though Nike, his mistress collected cash of N3,612,299, no personal assistant, orderly, official of grade level 13 travelled with him and no consultants.

“He only went to Turkey for purchase of furniture which indeed is a contraband and the Turkish parliament has no record of him or Lagos State House of Assembly to understudy the Turkish Government as a whole.”The transformation of Turkish parliament was not under study by the Lagos State House of Assembly and it is not even the tradition or under due process to pay travel allowance of any consultant, indeed Obasa is the consultant himself.
“Apart from buying furniture, he also went to Turkey to open discussion with a tile company for local partnership of tile making at his acquired land on Lagos-Ibadan expressway.

“All the estacodes and flight fare for the aides were collected by Obasa without any of them on the trip only the usual lady, Nike, collected her allocated money in cash.
Only one honourable member, late Hon. Osinowo, made the trip and was surprised on arrival in Turkey to discover no official meeting or visit to Turkish parliament happened except private trips to the tile company by Obasa and his business partners,” the source said.