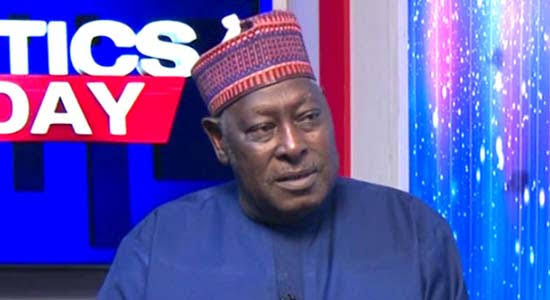 Babachir Lawal, former secretary to the government of the federation (SGF), has criticised the choice of Kashim Shettima as running mate of Bola Tinubu, presidential candidate of the All Progressives Congress (APC).

Tinubu had, on Sunday, announced Shettima, former Borno governor, as his running mate for the 2023 elections.

While the development has elicited varied reactions, Lawal kicked against the decision and asked the APC to find a way to compel Tinubu to change his choice.

The former SGF, who has been at the forefront of the campaign for Tinubu, in a statement on Tuesday, said the APC presidential candidate’s choice amounted to exclusion, which would not bode well for the party even if it wins the election.

“There might be some collateral damages though. I have also on several occasions passed on to him counsel and messages from some well meaning Nigerians intended to alert him on the possible outcomes of the Presidential ticket permutations.

“Tinubu is a very good man. He is a great listener. He has a very humble and friendly disposition to every one. He is very generous in both cash and kind, especially where it could advance his political interests. But I have realised that it is in the nature of power that sycophants and lapdogs have the most influence on leaders with such character traits. They will lie to him, malign and disparage others and generally do anything to curry his favour and to also put well-meaning associates in bad light.

“I suspect this is what has happened to my friend. He has been cornered by self-serving, hero-worshiping lapdogs.
It never used to be like this. While in his hey-days in Lagos, he surrounded himself with smart, street-wise guys that could tell truth to power. He had Rauf Aregbesola, Yemi Osinbajo, Babatunde Fashola, Dele Alake, Muiz Banire, etc. The Lagos days were the days of think-tanks, strategic planning, monitoring and evaluation, principles and ideologies. But these people have since grown-up and moved up to establish their own systems leaving my friend stranded. Nature they say abhors vacuum.

“Welcome the Abuja equivalent. But the Abuja equivalent are people inflicted with the modern Nigerian diseases – religious bigotry, sycophancy and morbid tribalism. They are mostly political jobbers who are most times not averse to the application of diabolical means. Gone are the days of think-tanks and strategic planning. Gone are the days of principles and ideologies. Try and call a meeting; they will not attend. Try and make a plan; they will sabotage it. Everything is ad-hoc, everything is chaotic because they excel in such environments.

“The result is that they have played on his longterm ambition to be President and have built it into a sort of desperation and a crescendo that easily justifies this satanic resort to a Muslim-Muslim ticket. This is the calamity that has befallen my friend.”

Lawal, who described Shettima as “an overambitious man who has a Machiavellian bent and has lots of money with which to procure a preferred-candidate status among Tinubu’s lapdogs”, said the choice of a Muslim-Muslim ticket will be counter-productive.

“Alhaji Kashim Shetima is a Greek gift from the Northern governors to Tinubu. I advise Bola to make sure Kashima’s two hands are always in his plain sight and empty,” he said.

“True, based on the advice of his new friends, Bola Ahmed Tinubu has made his choice. And I am sure he thinks he is ready for the outcome of that choice. He has chosen to bring religion to the front burner of Nigerian politics. And being a Muslim, he has chosen to take sides with his own religion. For all he cares, Christians can go to blazes with their votes