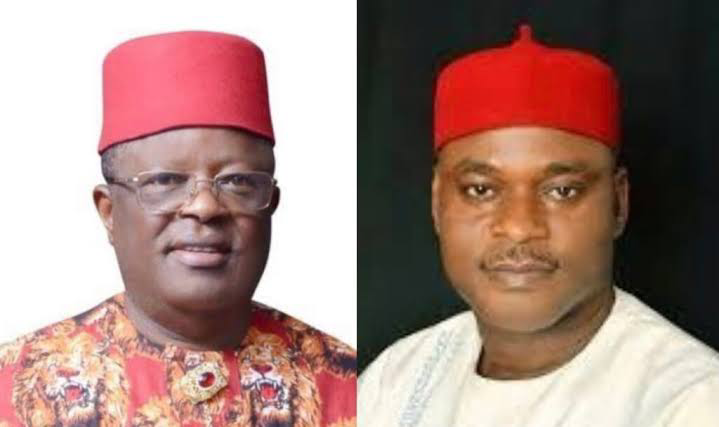 Ebonyi Governor David Umahi and his Deputy, Kelechi Igwe, have secured an order from the High Court of Ebonyi State not to vacate their offices in the interim

This followed an ex-parte motion by counsel to the duo, Roy Umahi brought pursuant to rule 3(3) of the High Court rules of Ebonyi State in suit no HAB/13/22.

The Court on February 28, 2022 ruled that Governor Umahi and his Deputy did not flout any law by defecting to the All Progressive Congress(APC) from the Peoples Democratic Party(PDP).

The Court presided by Justice Henry Njoku dismissed the matter for lacking in merit and fined the plaintiff, Sunny Ogbuoji, who was the APC candidate and runner up in the 2019 governorship election..

However, an Abuja Federal High Court on 8th March ruling on a similar matter filed by the PDP ordered the governor and his deputy to vacate their seats.

The presiding Judge, Justice Inyang Ekwo, further ordered the Independent National Electoral Commission(INEC) to accept new nominations for the two positions from the PDP and to issue them with certificates of return for them to be sworn in as governor and deputy.

Umahi and his Deputy rejected the Abuja ruling arguing that the Ebonyi High Court ruling should take precedence.

To this effect, Messrs Umahi and Igwe approached the same Ebonyi High Court on Thursday praying the court to declare that its judgement of the 28th February ,2022 on their defection to APC remains valid as a judgement in rem and as such should have precedence over any other contrary judgement and should be binding on all parties, persons and authorities.

In his ruling, Justice Henry Njoku granted the prayers sought by the duo and adjourned the matter to March 16 for hearing on the motion on notice.

He declared: “it is hereby ordered as follows, an interim order of of this honourable court for seven days(subject to renewal) is hereby granted in view of the judgement in suit no. HAB/13/22 delivered on the 28th day of February, 2022, being a judgement in rem and having precedence over any contrary judgement.

Meanwhile Speaker Francis Nwifuru and 14 other lawmakers sacked by Court for defecting to the All Progressives Congress (APC) from the People’s Democratic Party (PDP) on Thursday said they were dissatisfied with the judgement.

Justice Inyang Ekwo of Federal High Court, Abuja, had on Tuesday in his ruling, declared vacant the seats of Speaker Nwifuru and 14 other lawmakers.

The Judge ordered INEC to conduct a bye election to fill in the vacant seats, in the respective constituencies within 90 days.

But Mr Nwifuru who briefed Journalists alongside the other 14 lawmakers at the in Abakaliki disclosed that they had filed an appeal and stay of execution, in respect to the judgement

Nwifuru, however, said they would obey the judgement.

“It is about two days ago we started hearing the rumour that a federal high court in Abuja declared our seats vacant on the ground that we defected from PDP to APC.

“I know the position of the constitution of the federal republic of Nigeria, but I am not in position to know how the judiciary interprete the law. I am not against that.

“We have filed an appeal and a stay of execution. Since the matter is in the court of law, there is no need saying anything about it. Our position is that the law will take its position. We are begging our constituents to remain law abiding”,he said.