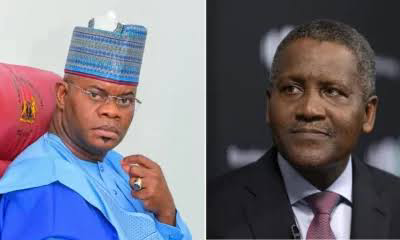 The Presidency, on Monday, intervened in the struggle for ownership of the Dangote cement factory in Obajana, Kogi State.

The meeting at the Office of Chief of Staff to the President in Presidential Villa in Abuja was attended by the President of the Dangote Group, Aliko Dangote, Governors Yahaya Bello (Kogi) and Abdullahi Sule (Nasarawa).

A reliable source in the Presidency confirmed the meeting. Our reporter also saw the governor of Kogi State heading towards the Chief of Staff Office shortly after attending the inauguration of the All Progressives Congress (APC) Women Presidential Campaign Committee at the Banquet Hall of the State House.

The intervention came after the decision of Kogi State government to shut down the Obajana factory last week over allegations of tax evasion and unresolved ownership.

Already, the management of Dangote Group is said to have concluded plans to approach the court this week over the legality of the Kogi state’s vigilante members who reportedly stormed the Obajana cement factory, where many of the company’s staff were allegedly wounded and the facility shut.

The Kogi State Government, last Thursday, presented to the public, the report of the Specialised Technical Committee on the Evaluation of the Legality of the Alleged Acquisition of Obajana Cement Company Plc by Dangote Cement Company Limited.
The detailed report, submitted to Governor Yahaya Bello, was presented to the public by the Secretary to the State Government, Dr. (Mrs) Folashade Ayoade.

Citing documents, she revealed that the purported transfer of Obajana to Dangote Industries Limited was “invalid, null and void”.
Ayoade disclosed in the report that three Certificates of Occupancy for Obajana Cement Company Plc, which the Kogi State government solely owned at the time, were used to obtain a loan of N63billion by Dangote.

According to her, the committee, in view of its findings, has therefore recommended that Kogi State should take steps to recover the Obajana Cement Company from the Dangote Group.

The committee, chaired by the SSG, also recommended that the “Kogi State government should take steps to recover all accrued dividends from profits made over the years, including accrued interest on the same.

In his remarks, Governor Yahaya Bello said that he had taken the bold step, in line with his mandate to safeguard the lives and livelihood of the people of Kogi State, including residents and to ensure their wellbeing.

Bello said this was also coming on the heels of protests by the people of the state who felt they had been suppressed and marginalised by the Dangote Group who had come to rip them off.

In forcefully evicting the workers to enforce the shutdown, the vigilantes shot 27 of our workers and destroyed some of the company’s property at the plant.”