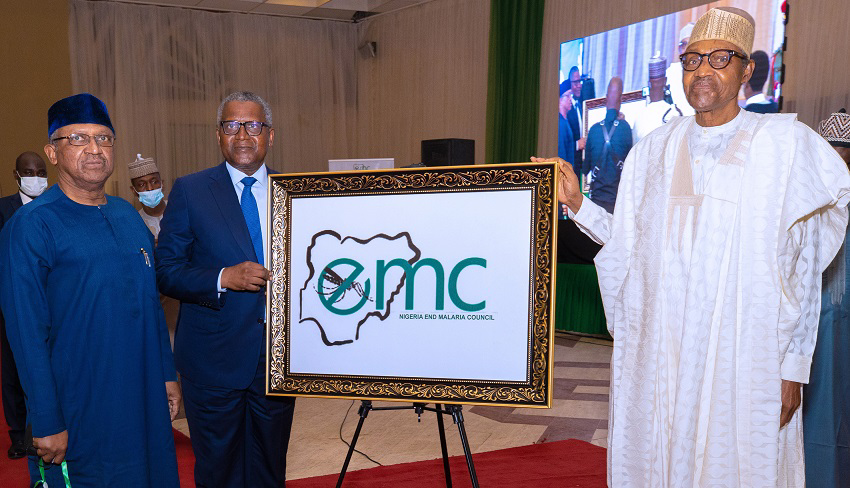 The council, led by Aliko Dangote, President of Dangote Group, was inaugurated on Tuesday at the state house, Abuja.

Ekumankama Joseph Nkama, minister of state for health; Osagie Ehanire, minister of health; Boss Mustapha, secretary to the government of the federation (SGF), and Ibrahim Gambari, chief of staff to the president, were present at the inauguration.

Speaking to a 16-member council headed by the President of the Dangote Group, Aliko Dangote who accepted to be an ambassador for malaria, the President maintained the quest to eliminate mallards remains a priority for his administration.

“Malaria as we all know is an age-long disease and remains a major public health challenge in Nigeria.  The World Health Organisation report of 2021 shows that Nigeria alone accounts for 27% of all cases of malaria and 32% of deaths globally,” Buhari stated.

“Malaria infection can cause severe disease and complication in pregnant women and lead to high rates of miscarriage. It is also responsible for a considerable proportion of deaths in infants and young children, with children under 5 years being the most vulnerable group affected. These are reasons why we must not relent in fighting malaria.”

According to Buhari, beyond improving the quality of life, health and well-being of Nigerians, the strategy adopted had public health and socio-economic benefits for the country.

The President urged the council to deploy best practices in its dealings in order to reduce significantly Nigeria’s malaria burden which according to the WHO now accounts for 27percent of all cases and 32 percent of deaths globally.

He added, “Our inauguration today will therefore ensure that malaria elimination remains a priority on our agenda, with strong political commitment from leaders at all levels. Additionally, the End Malaria Council will provide a platform to advocate for more funding to protect and sustain progress made so far by our country, and put us on a pathway to ending malaria for good.

“The successful implementation of the Council’s agenda will result in improvement in the quality of life, health and well-being of Nigerians, by providing impetus for malaria elimination and by saving about N687 billion nationally which is the estimated economic burden of malaria for 2022. The savings could increase to N2 trillion in 2030. A concerted strategy to tackle malaria, therefore, has both public health as well as socio-economic benefits for Nigeria.”