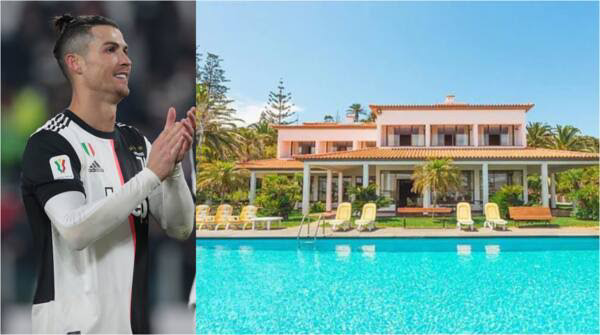 CRISTIANO RONALDO is reportedly building a new mansion in one of Portugal’s most prestigious residential areas.

The Manchester United striker, 37, purchased the most expensive flat ever sold in Lisbon last year – a £6.5 million property that includes a gym and indoor swimming pool.

The dad-of-five has also splashed out more than £7m on a large plot of land in Quinta da Marinha on the so-called Portuguese Riviera, according to Portuguese media.

Work has just started on the mansion respected Portuguese daily Correio da Manha says will be the latest addition to the football star’s property empire.

It says CR7 plans to use the house as an investment, although popular magazine TV 7 Dias claimed he planned to use it as a family home after his retirement.

A source described as a future neighbour told the magazine: “The land was fenced off recently and it was purchased by Ronaldo. “This is where he’s coming to live with his family when he finishes his career.

“Everyone round here knows it and of course we’re happy. Ronaldo is Ronaldo.”

Quinta da Marinha is half an hour from Lisbon Airport and ten minutes from the centre of the coastal town of Cascais, the Lisbon coastline’s premier holiday destination.

The affluent coastal region, centred on Cascais, Estoril and Sintra, is known as the Portuguese Riviera.

Cristiano’s property empire also includes a seven-storey apartment block overlooking the Atlantic Ocean in the Madeiran capital Funchal which he purchased in 2019.

His mum Dolores and older brother Hugo and his family live at the property.

The former Real Madrid forward spent time there with his girlfriend Georgina Rodriguez and their children after flying back to his native island following his mum’s stroke in 2020.

He later moved to a £3,500-a-week rented villa before jetting back to Italy, where he had a luxurious villa.

The Portuguese media identified Cristiano as the mystery buyer of Portugal’s most expensive apartment. The star is said to have beaten off bids from two other millionaires to snap up the 3,100 square foot flat in the Avenida da Liberdade area of central Lisbon.

He showed off the house in a video released in December 2015, treating fans to a tour of his bedroom, living room, dining room and garden and wishing people a merry Christmas.

Before splashing out on his expensive Lisbon apartment, he sold a mansion for £2m to his former Real Madrid team-mate Pepe in Geres in northern Portugal.

He is said to have used the money from that sale to buy his Funchal apartment block.