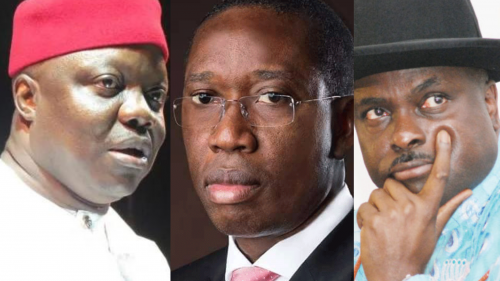 Crisis rocking the Delta State Peoples Democratic Party, (PDP) following the party’s primaries especially that of the governorship may have deepened as former governors, James Ibori, Emmanuel Uduaghan and others on Thursday shunned the party’s grand reception to welcome Governor Ifeanyi Okowa as the vice presidential candidate of the party.
The reception which took place at the cenotaph, Asaba, the state capital, unlike before had a low turnout while notable party leaders and elders from the state were conspicuously absent.

Among the absentees were also a senator representing Delta South senatorial district and former PDP governorship aspirant, James Manager.SaharaReporters observed that following the PDP primaries where Okowa was accused to have secretly supported and imposed his preferred House of Assembly, National Assembly and governorship candidates on the people across the state, this created “cracks and bad blood” among the party chieftains.

Speaking with SaharaReporters, some members of the party who pleaded for their names not to be mentioned said at the reception that the turnout showed that there was big crisis in the party in the state.
“Is this what we call a reception for our governor and PDP vice presidential candidate in the 2023 forthcoming general elections? Where are Ibori, Uduaghan, Manager and other notable leaders of the party? No single South-South leader; not even a governor from the South-South region to rejoice with us as a party and also Delta State that has produced the vice presidential candidate; this shows the many odds that are indeed against the governor,” a source said.

Addressing the people during the reception, the state governor, Ifeanyi Okowa and vice presidential candidate of the PDP for the 2023 general elections, commended Deltans and the presidential candidate of the party, Atiku Abubakar even as he vowed that come 2023, the PDP shall send packing the government of All Progressive Congress, (APC), which he described as a failed government that has inflicted pains on Nigerians.

The Delta State chieftain of the PDP and former Minister of Niger Delta Affairs, Elder Godsday Orubebe had last week defected to the APC, stating that he took the decision because the party was not ready to regain power in the 2023 general elections.

Orubebe, in a letter addressed to the party’s national chairman, Senator (Dr.) lyorchia Ayu, had noted among other things that the present situation in the party did not inspire confidence that the party was ready to regain power in 2023.