Court threatens to strike out EFCC’s suit against Okorocha 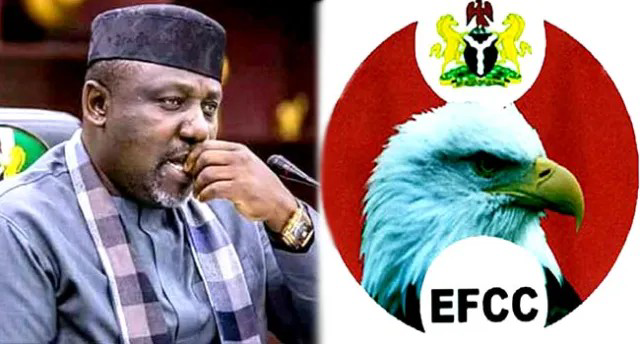 A Federal High Court in Abuja, on Monday, has threatened to strike out the Economic and Financial Crimes Commission’s suit against former governor of Imo State, Senator Rochas Okorocha.

Justice Inyang Ekwo gave the warning following a complaint by Cosmas Ugwu, counsel for the EFCC, that all efforts made by the agency to effect service of court processes on Okorocha had been unsuccessful.

The News Agency of Nigeria reports that Okorocha, who is expected to be arraigned on a 17-count money laundering charge, is the current senator representing Imo West Senatorial District.

Justice Ekwo had, on February 22, adjourned the arraignment until March 28, after Ugwu pleaded with the court over the agency’s inability to serve the senator.

But when the matter was called on Monday, Ugwu informed the court that the matter had been slated for arraignment of the defendants.

He, however, said “unfortunately the first defendant was yet to be served with the charge.”

The EFCC counsel said several efforts made to effect the service so that all the defendants could be charged together were unsuccessful.

“In view of this, we plead with my lord to graciously accommodate us with an adjournment,” he said.

In her response, Justice Ekwo reminded Ugwu that on February 22, when the case came up, he had given the same excuse.

“One month plus you are still coming to say you are yet to serve,” the judge said.

Ekwo said though he would grant Ugwu’s prayer for another adjournment, if he came up with the same excuse in the next adjourned date, the matter would be struck out.

“This will be the last time this matter will be adjourned,” he said.

The judge said the adjournment was to see how serious the commission was in prosecuting the matter.

He then adjourned the matter until May 30, for the defendants’ plea to be taken