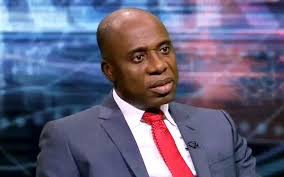 The Federal High Court in Abuja on Wednesday okayed the filing of a contempt suit against the Minister of Transportation, Rotimi Amaechi, for allegedly flouting an earlier restraining order.

Mr Amaechi faces allegation of violating a December 17, 2021 order of the court restraining him and other parties to the suit over the appointment of an operator for a sensitive international cargo tracking system.

“The court will not close its eyes when being told that its orders are being flouted. We have to suspend proceedings for the court to ascertain the veracity of the allegations,” the judge, Donatus Okorowo, said when the the substantive case challenging the appointment process came up for hearing on Wednesday.

“Once the issue of contempt is raised, the court must suspend proceedings,” the judge maintained.

Mr Amaechi risks being jailed if found guilty at the end of the contempt hearing.

A civil society orgainsation, the Citizens Advocacy for Social & Economic Rights (CASER), had filed a suit last year to challenge the ongoing process for the appointment of an operator the International Cargo Tracking Note (ICTN).

The organisation alleged that there were irregularities in the appointment process.

Two firms – Medtech Scientific Limited and Rozi International Nigeria Limited – said to have been penned down for the appointment by Mr Amaechi are joined in the suit as defendants.

The other defendants are Mr Amaechi, the Bureau of Public Procurement (BPP), the Attorney-General of the Federation, Abubakar Malami, and the two firms.

On December 17, 2021, the court, following an ex parte application by the plaintiff, made an order restraining parties “from taking further steps towards nominating any company or entity to be operators” of the ICTN in Nigeria “pending the hearing and determination of the motion on notice.”

Earlier on Wednesday, CASER’s lawyer, Abdulhakeem Mustapha, told the court that Mr Amaechi had violated the court order, and confirmed that he has filed Form 48 to initiate the contempt suit against the minister.

Mr Mustapha, a Senior Advocate of Nigeria, who informed the judge that Mr Amaechi allegedly breached the order for the maintenance of status quo, also confirmed that he was in the process of filing application for the minister to be sent to prison.

“He (Amaechi) has taken fundamental steps on the subject matter of this suit, and we have documents to be placed before the court to establish that he has ignored the order of the court completely,” Mr Mustapha said.

“In order to protect the sanctity of this honourable court, we have issued Form 48 against the Minister of Transportation. With the commencement of this committal process, which takes precedence over any other matter, we urge this court to suspend further proceedings in the substantive suit,” he said.

Reacting, Mr Amaechi’s lawyer, Omosanya Popoola, confirmed receiving a letter notifying him of the issuance of Form 48 on his client.

Mr Popoola said his client is a law-abiding citizen and he was yet to be personally served with the Form 48.

On his part, the counsel for BPP, Akin Olujinmi (SAN), said his client had not been served with the Form 48 personally as required by law.

Mr Olujinmi, a former Attorney-General of the Federation, argued that there was no motion for committal before the court, adding that the plaintiff’s lawyer had to file affidavit to establish his allegations that the defendants, including Mr Amaechi had violated the court’s order.

The AGF’s lawyer, Mohammed Sheriff, agreed with the submissions by lawyers to Mr Amaechi and BPP that proceedings in the main suit should not be halted.

The judge, after listening to the lawyers, directed the suspension of the main suit to give way to the hearing of the contempt suit.

He said the court could not close its eyes to the allegation of violation of its order by anyone.

The judge then directed plaintiff’s lawyer to proceed to file a motion on notice with an affidavit to establish the facts of the alleged violation of court’s orders, which must be filed and served before the next adjourned date.

The court scheduled ruling for May 9 on the application filed by a firm, Antaser Nigeria Limited to be made a party in the suit.

Antaser’s lawyer, James Ogwu Onoja (SAN) told the court that his client was a necessary party in the case because it sought to participate in the bidding process but was unlawfully excluded.

Plaintiff in the suit, CASER, stated, in an affidavit supporting the substantive suit, that the purported procurement process, leading to the appointment of the fourth and fifth defendants (Medtech and Rozi) as companies providing ICTN services shows that it was riddled with non-compliance with the known procurement procedures as stipulated in the law.

The plaintiff claimed that President Muhammadu Buhari “was misguided in granting an anticipatory approval for a direct appointment of the fourth and fifth defendants’ companies.

“The approval by Mr. President cannot waive the procurement process stipulated under the Public Procurement Act,” the plaintiff said.

It added that the steps by Mr Amaechi and BPP “by opting for selective bidding and or direct procurement method amount to a wilful violation of due process”.

It also said the move was “a desperate design to circumvent the provisions of the Procurement Act by abandoning the demands of fairness, competitiveness, accountability and transparency as envisaged by the Act.”

The International Cargo Tracking Note is an electronic cargo verification system that monitors the shipments of seaborne cargoes and enables a real-time generation of vital data on ships and cargo traffic in and out of Nigeria.