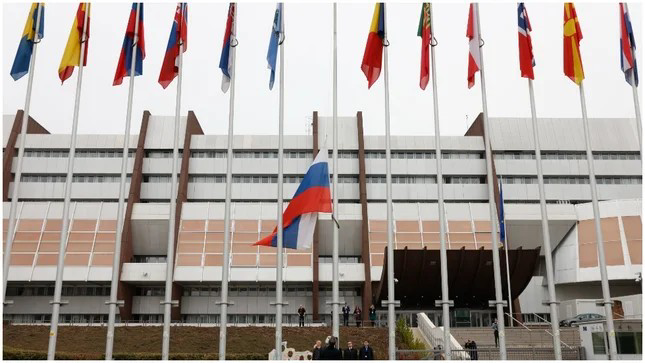 Europe’s leading human rights organization announced Wednesday that it was expelling Russia in response to the country’s invasion of Ukraine.

The Council of Europe’s committee of ministers said in a press release that as of March 16, after 26 years of membership, the Russian Federation ceased to be a member of the 47-country organization. Russia joined the organization on Feb. 28, 1996.

Leaders from the Council of Europe issued a joint statement Tuesday, saying, “We expressed on several occasions our firm condemnation of the Russian Federation’s aggression against Ukraine.”

They called the invasion “unjustified and unprovoked aggression,” saying it had led the organization’s Committee of Ministers and Parliamentary Assembly to initiate the procedure of expelling the Russian Federation from the organization.

They added that “through their actions in Ukraine the Russian authorities deprive the Russian people of the benefit of the most advanced human rights protection system in the world, including the jurisdiction of the European Court of Human Rights and our vast convention system.”

The Council of Europe’s leaders expressed solidarity with the Russian people, who they said “share democratic values and aspire to remain part of the European family where they belong.”

This comes a day after Russia said it was voluntarily leaving the Council of Europe after it was suspended on Feb. 25. The Russian Foreign Ministry gave the Council of Europe’s Secretary General Marija Pejčinović Burić formal notice of Moscow’s withdrawal from the group on Tuesday.

The ministry alleged the organization was targeting Russia and said the Russian constitution would protect individuals’ human rights and freedoms in the country.

In last few weeks, Russia has reportedly arrested thousands of anti-war protesters and has passed a law that could punish any journalist who contradicts the Russian government’s official statements on the conflict in Ukraine with up to 15 years in prison