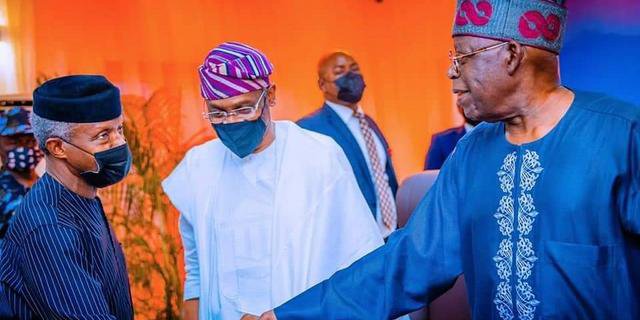 The seven South West presidential aspirants from the APC are set to hold talks on Saturday over the possibility of choosing a consensus candidate ahead of the primary.

South-West presidential aspirants under the platform of the ruling All Progressives Congress (APC) are expected to hold a crunch meeting in Abuja today, Saturday June 4, 2022, to fashion a way forward ahead of the primary.

Sources familiar with today’s meeting said seven aspirants from the South-West are expected to grace what has been dubbed the final meeting before the party’s all-important presidential convention set to commence on June 6.

The newspaper also reported that the meeting would take place at the Abuja residence of the former governor of Ogun State, Chief Olusegun Osoba, around 8pm.

It was gathered that discussion would centre around the South-West unity and the possibility of putting forward a consensus candidate to vie for the ticket.

One of the aspirants anonymously told The Punch that, “We will all be meeting at Chief Osoba’s home by 8pm in Abuja. Everyone is expected to be present. We will all sit together and discuss the need to ensure that the South-West gets the ticket.

“However, all of us will be asked to be truthful with one another and see who among us has the best chance of winning the primary. Then if anyone is willing to step down to boost the chances of the South-West, then this will be encouraged.”

It has been said that the emergence of former Vice President, Atiku Abubakar, as the Peoples Democratic Party (PDP) flag-bearer has changed the permutation of the APC in picking its own flag-bearer.

Consequently, some northern governors have intensified efforts to push for the emergence of a northern presidential candidate in the APC, a move that has now unsettled the South-West bloc of the party.

The move by the northern governors was said to have caused Tinubu’s outburst at a meeting with Ogun State delegates on Thursday, where he reminded President Muhammadu Buhari of the promise he made not to let down the Yoruba nation.