Confusion in PDP over plot to stop Atiku, Saraki, Tambuwal 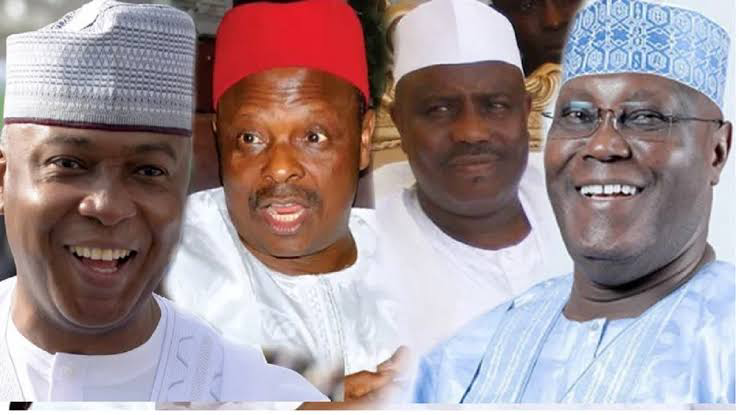 The uproar at the meeting was triggered by the insistence of some leaders from the South that members, who defected from the party to the All Progressives Congress (APC) in the past and returned, should be excluded from seeking the 2023 presidential ticket.

A vocal governor from the South, according to sources, spearheaded the call.

However, they all returned to PDP following irreconcilable differences with the Muhammadu Buhari Presidency and the APC leadership. Some of the returnees won and lost elections in 2019 on the platform of the PDP.

They are all believed to be eyeing the party’s presidential ticket.

Those canvassing the exclusion of former defectors argued that their defection to APC was the major reason PDP lost power in 2015. They were said to have argued that the PDP found itself in the opposition today because of their past actions.

The southern power brokers in the party, who were also reported to have insisted on zoning of the ticket to their region, pointed out that the failure of former President Goodluck Jonathan to respect the zoning arrangement for the 2015 election led to the mass defection that hit PDP.

But some members, mainly from the North, reportedly countered the arguments, saying the call for exclusion was not only a distraction but a witchhunt of the returnees.

A source close to the meeting said: “We are all aware that these same people contested elections in 2019 on the platform of PDP after returning to our great party.

”If nobody called for their exclusion in 2019, on what grounds are they calling for their disqualification now?

”It is quite unfortunate that some people have been carrying on as if PDP is their personal property.

”We need to make it clear that some people built PDP from scratch to become what it is today. So people should stop conducting themselves as if they are the owners of the party. We all have an equal stake in PDP.”

Stating their case further, they declared that it’s against the spirit of the PDP constitution and the 1999 Constitution to prevent interested members from seeking the party’s ticket for any elective position.

Another source told The Nation that when the disagreement degenerated, Dr Ayu brought the meeting to close.

Consequently, the meetings of the National Caucus, the Board of Trustees (BoT) and National Executive Committee (NEC) which were to hold yesterday were all shifted to today to allow for further consultations.

Speaking after the truncated meeting, PDP Spokesman Debo Ologunagba explained that the decision to end the meeting abruptly was taken to allow various committees of the party study documents to be presented to NEC for approval.

The disagreement over moves to exclude some persons from vying for the presidential ticket was confirmed by Chief Raymond Dokpesi, who coordinates Atiku’s consultative engagements, during a meeting between Atiku and members of the BoT yesterday.

Addressing the BoT members, Dokpesi said: “The information reaching me now is not very palatable. It’s a case of attempting to divide this party.

“Information available to me indicates that some persons, who are founding members of the party, but who left the party in the past and came back, should not be allowed to contest for the PDP presidential ticket.

”Sentiments and emotions have been brought in by various interest groups. It is for you, as fathers and mothers of this party, to defend what the vision should be, and to discern what the agitations from certain quarters appear to be”.

My position on zoning, by Atiku
Former Vice-President Atiku Abubakar yesterday intensified his presidential aspiration by meeting with BoT members.

Addressing the party’s elders at the Yar’ Adua Centre, Atiku said 2023 presents PDP with the last opportunity at regaining power or going down completely.

He said: ”Your excellences, friends, brothers and sisters, we are now at a crucial moment in this country. For many of you here, it is either we retire together or we move on together.

”As one of the speakers said, I am worried and you should be worried too, that if we do not win, it means we will be in opposition again for the next eight years.

”By the next eight years, I don’t know how many of you will be left in politics. It (defeat) may even ultimately lead to the death of the party because people gravitate, particularly in developing countries, towards governments.

”Ordinary people naturally gravitate towards the government. So, this is a very, very crucial and historical moment in history for our survival. I want you to think about it.”

Atiku dismissed his alleged disregard for zoning, saying the PDP had always been faithful with the zoning arrangement.

He said: “Yes, people have not stopped talking about power rotation and zoning, or whatever it is.

”For sure, in the party, we invented and formulated this zoning policy simply because we wanted every part of this country to have a sense of belonging and I personally have paid my dues on the issue of zoning.

”Many of you were members of our government when all PDP governors came in 2003 and said I should run and I said no.

”We had agreed that power should remain in Southwest. Why should I contest? Some of those governors that supported me at the time went to jail. Some of them were kicked out of their offices but we made sure that we kept the zoning policy.

”So, you cannot come and try to imply that PDP has not been following the zoning policy.

”In the many years of PDP government; eight years and six years, all of them (President) were from South.