Coinbase is building its own social network for NFTs 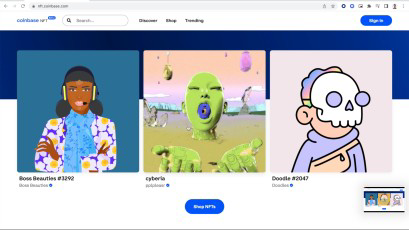 The popular cryptocurrency exchange Coinbase launched its nonfungible token (NFT) marketplace on April 20 allowing select buyers and sellers to trade the digital collectibles. The platform will open up to the general public in the coming months.

Coinbase’s offering is a direct challenge to OpenSea, which has become the most popular website for buying and selling NFTs, often collectible digital art, since the craze began in 2021. Coinbase, which removed technical barriers from crypto trading with its easy-to-use mobile app, enables average users to buy cryptocurrencies like Bitcoin and Ether with a credit card or a bank account. The platform has amassed 89 million users.

Coinbase now plans to replicate this seamless experience for NFT trading, “just as Coinbase helped millions easily and safely access Bitcoin for the first time,” wrote a company spokesperson by email. But the company plans to challenge OpenSea—essentially the eBay of NFTs—by building a marketplace emphasizing the social nature of buying and selling NFTs. Coinbase says it’s building a social media platform that lets NFT collectors and creators build profiles, comment on NFTs, upvote and downvote others’ comments, and discover new collections and creators via an algorithmic “For You” news feed.

Betting on the future of NFTs

On a press call on April 19, executives said they don’t want Coinbase to be a “walled garden,” and will allow users to use any wallet—including Coinbase’s proprietary wallet and the popular MetaMask wallet—to make payments and store NFTs (eventually taking a low “single-digit” cut). While the platform will only support NFTs on the Ethereum blockchain for now, a spokesperson confirmed that it will integrate with other blockchains in the future. (OpenSea also supports NFTs on the blockchains Polygon, Solana, and Klatyn.)

Coinbase also plans to adopt a laissez-faire approach to content moderation, echoing early sentiments from Twitter’s former CEO Dick Costolo who once said the network belonged to the “free speech wing of the free speech party,” as well as Reddit executives who avoided banning hate speech on their platform until 2021.

Coinbase may be forced to develop more robust site rules and content moderation practices, but for now it says it will “follow the law” of the jurisdictions it serves, and warn users when material might be inappropriate, sexual, or graphic. CEO Brian Armstrong wrote in a February blog post that “we think it sets a dangerous precedent when tech companies, such as Coinbase, or their executives start making judgment calls on difficult societal issues, acting as judge and jury.”

What remains to be seen is just how big a business NFTs will be in the future. In the last year, the sale of Beeple’s $69 million NFT  at Christie’s made NFTs the next coveted crypto asset and OpenSea has become the most popular online NFT trading hub generating $3.4 billion in sales In March 2022 alone, according to data collected by The Block, a crypto news site. In recent months, the website LooksRare has complicated OpenSea’s dominance with high trading volumes, but much of that activity is likely attributable to so-called wash trading, where users sell to themselves to create the illusion of demand and reap crypto rewards.

Overall, the number of NFT transactions on these platforms appears to be declining.