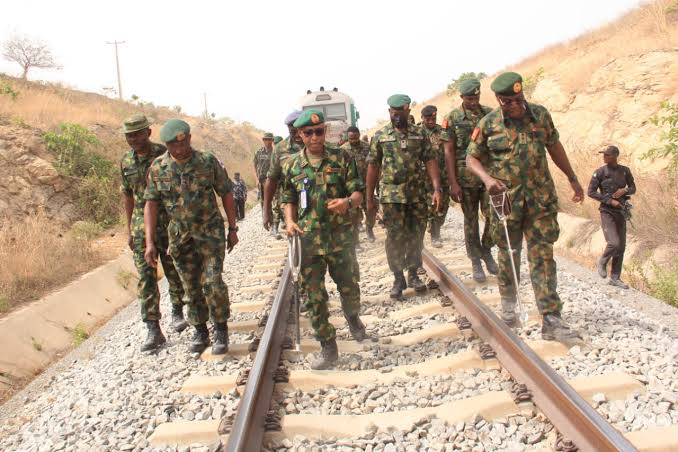 The Chief of Army Staff, Lieutenant General Faruk Yahaya, has ordered troops to intensify the search for victims of the Kaduna-Abuja train attack, and also hunt down the attackers.

The army boss gave the order when he visited the scene of the Kaduna-Abuja train attack on Tuesday.

This was contained in a statement by the Director, Army Public Relations, Brigadier General, Onyeama Nwachukwu, titled, ‘COAS on assessment visit to scene of Kaduna-Abuja train attack’.

The statement read, “The COAS, who was accompanied by some principal staff officers of the Army Headquarters and the General Officer Commanding 1 Division, on arrival at scene, assessed the security situation around the general area of the attack and inspected the attacked train, as well as the rail track to evaluate the degree of damage.

“He ordered the troops of the NA and other security agencies to intensify their search and rescue operations to ensure that the kidnapped victims are rescued unconditionally.

“The COAS has also assured Nigerians that the troops will be undeterred and vehement in the fight against banditry and other forms of criminality.

“He urged members of the surrounding communities and all Nigerians to continue to avail troops with credible information to enhance their operations across the country.

“Gen Yahaya observed that the attack reverberates the need for critical stakeholders to review the security of railways across the country in order to achieve the desired security architecture for railway transportation.”

Vardiafrica had reported how terrorists in their numbers had bombed the Abuja-Kaduna rail and attacked a train filled with passengers.

The Kaduna State Commissioner of Internal Security and Home Affairs, Samuel Aruwan, who confirmed the attack on behalf of the State Government, added that passengers who sustained injuries and other casualties had been evacuated to hospitals.

Prominent Civil Society Organizations such as the Human Right Writers Association of Nigeria and Adopt A Goal initiative have also condemned the silence of the President, Major General Muhammadu Buhari(retd) on the incidence.