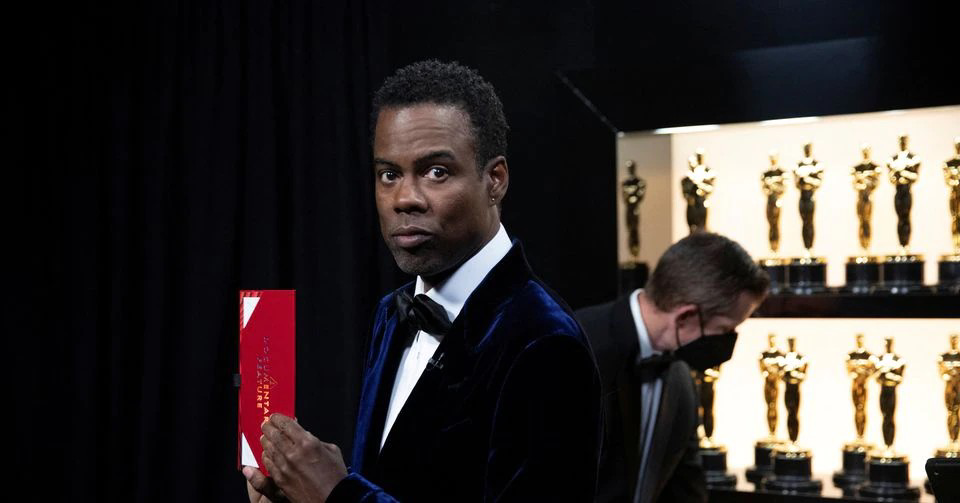 Comedian Chris Rock is performing in public Wednesday for the first time since Oscar-winning actor Will Smith slapped him for a joke about Smith’s wife during the Academy Awards show.

The nighttime performance in Boston comes just three days after Smith slapped Rock on the Oscars stage, stunning the crowd at the 94th Academy Awards and those watching at home.

Rock was greeted by thunderous applause and told the audience “I’m still kind of processing what happened,” according to audio posted by the Hollywood trade outlet Variety. He also tamped down any audience expectations that he would talk at length about the slap, telling them: “If you came to hear that, I’m not … I had like a whole show I wrote before this weekend.”

“We love you,” someone shouted at one point, eliciting cheers from the audience, according to the audio.

At Sunday’s Oscars, Rock had made a joke about Jada Pinkett Smith’s buzzed haircut. Pinkett Smith has spoken publicly about her diagnosis of alopecia, which can cause baldness.

Smith promptly stood up from his seat at the front of the venue and took to the stage, slapping Rock across the face before sitting back down and yelling at Rock to keep his wife’s name out of his mouth.

Within an hour, Smith won best actor, receiving a standing ovation. During his five-minute acceptance speech, Smith talked about defending his family and apologized to the academy. A day later, Smith issued an apology to the comedian, to the academy and to viewers at home, saying he was “out of line” and that his actions are “not indicative of the man I want to be.”

Ticket prices for Rock’s shows skyrocketed after the slap. In Boston, attendees were prohibited from bringing phones or other recording devices to their seats.

George Guay, a 24-year-old fan from Boston who grew up on “Everybody Hates Chris,” said he bought a ticket after the Academy Awards.

“He’s the most popular celebrity so I want to be here,” Guay said, adding that he hopes Rock opens up with a response to the situation. “I just want a good show.”

The Academy of Motion Pictures Arts and Sciences condemned Smith striking Rock. Its board of governors met Wednesday to initiate disciplinary proceedings against Smith for violations of the group’s standards of conduct. The academy said it had asked Smith to leave Sunday’s Oscar ceremony after hitting Rock, but he refused to do so.

The Los Angeles Police Department said Sunday it was aware of what happened but was not pursuing an investigation because the person involved declined to file a police report.

Pinkett Smith responded Tuesday with a graphic on Instagram that read: “This is a season of healing and I’m here for it.” She offered no further comment.

This was not the first time that Rock had made a joke at Pinkett Smith’s expense. When he hosted the 2016 Oscars, some people boycotted the ceremony over the #OscarsSoWhite group of nominees, including the Smiths. Said Rock then: “Jada boycotting the Oscars is like me boycotting Rihanna’s panties. I wasn’t invited.”

Wanda Sykes, who co-hosted the Oscars with Amy Schumer and Regina Hall, said she felt physically ill after Smith slapped Rock. In an interview with Ellen DeGeneres scheduled to air April 7, Sykes also said letting Smith stay and accept his award should not have happened.

Several stars rushed to counsel and calm Smith after he returned to his seat, including Denzel Washington, Bradley Cooper and Tyler Perry.

The drama overshadowed some historic wins. The deaf family drama “CODA” became the first film with a largely deaf cast to win best picture. For the first time, a streaming service, Apple TV+, took Hollywood’s top honor, signaling a profound shift in Hollywood and in moviegoing. Wins for Ariana DeBose of “West Side Story,”Troy Kotsur of “CODA” and Jane Campion, director of “The Power of the Dog,” all had made history.