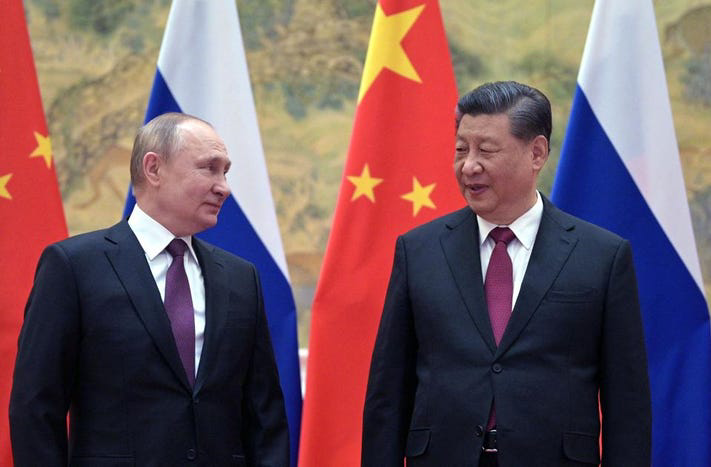 A Western intelligence report said senior Chinese officials told senior Russian officials in early February not to invade Ukraine before the end of the Winter Olympics in Beijing, according to senior Biden administration officials and a European official.

The report indicates that senior Chinese officials had some level of knowledge about Russia’s war plans or intentions before the invasion started last week. President Vladimir V. Putin of Russia met with President Xi Jinping of China in Beijing on Feb. 4 before the opening ceremony of the Olympics. Moscow and Beijing issued a 5,000-word statement at the time declaring that their partnership had “no limits,” denouncing NATO enlargement and asserting that they would establish a new global order with true “democracy.”

The intelligence on the exchange between the Chinese and Russian officials was classified. It was collected by a Western intelligence service and considered credible by officials reviewing it. Senior officials in the United States and allied governments passed it around as they discussed when Mr. Putin might attack Ukraine.

However, different intelligence services had varying interpretations, and it is not clear how widely the information was shared

One official familiar with the intelligence said the material did not necessarily indicate the conversations about an invasion took place at the level of Mr. Xi and Mr. Putin. Other officials briefed on the intelligence declined to give further details. The officials spoke about the report on the condition of anonymity because of the sensitivity of the intelligence.

When asked by email on Wednesday whether Chinese officials had urged Russian officials to delay an invasion of Ukraine until after the Olympics, Liu Pengyu, the Chinese Embassy spokesman in Washington, said, “These claims are speculation without any basis, and are intended to blame-shift and smear China.”

China held the closing ceremony of the Olympics on Feb. 20. The next day, Mr. Putin ordered more Russian troops to enter an insurgent-controlled area of eastern Ukraine after state television broadcast a meeting between him and his national security council and a long speech in which he said Ukraine should be a part of Russia rather than existing as a country. Early on Feb. 24, the Russian military began a full-scale invasion of Ukraine, including carrying out attacks on Ukrainian cities with ballistic missiles, artillery shells and tank units.

American and European officials have said they find it hard to believe it is mere coincidence that Mr. Putin’s invasion did not start until right after the Olympics

Over the winter, Russia moved military units from its border with China and other parts of the east to the border with Ukraine and to Belarus to prepare for the invasion. The movements indicated a high level of trust between Russian and Chinese officials.

China and Russia have been strengthening their economic, diplomatic and military ties for years. Mr. Xi and Mr. Putin met 37 times as national leaders before their discussions in Beijing ahead of the Olympics. The ambitious joint statement that the two nations issued during that meeting alarmed American and European officials, especially because it was the first time China had explicitly sided with Russia on issues concerning NATO and European security. European leaders have denounced China and Russia in recent weeks, including in speeches at the Munich Security Conference.

For months, some American officials tried to recruit China in efforts to avert war in Ukraine.

Days after President Biden spoke to Mr. Xi in a video summit on Nov. 15, senior American officials decided to present intelligence on the Russian troop buildup around Ukraine to senior Chinese officials to try to get them to persuade Mr. Putin to stand down. The Americans spoke to Qin Gang, the Chinese ambassador in Washington, and to Wang Yi, the foreign minister, among others. In a half-dozen meetings, including one in Washington between U.S. officials and the Chinese ambassador just hours before the Russian invasion, Chinese officials expressed skepticism that Mr. Putin would invade Ukraine, American officials said.

After one diplomatic exchange in December, U.S. officials received intelligence showing Beijing had shared the information with Moscow, telling the Russians that the United States was trying to sow discord and that China would not try to impede Russian plans and actions, American officials said.

U.S. intelligence findings and assessments of Russian plans for an invasion of Ukraine have generally been accurate. The Americans began a campaign last fall to share intelligence with mainly ally and partner nations and to present declassified material to the public to build pressure on Russia to halt any planned invasion. William J. Burns, the C.I.A. director, flew to Moscow on Nov. 2 to confront the Russians with the information, and on Nov. 17, American intelligence officials shared their findings with NATO.

British officials had assessed that an attack by Mr. Putin ahead of the Olympics was possible but unlikely, according to multiple officials briefed on London’s intelligence. That was partly based on the Western intelligence report, but mostly on an analytic assessment that Russia’s plan to overcome Western sanctions was highly dependent on China’s support and the notion that Mr. Putin would not risk angering Mr. Xi.

British officials also assessed that the joint statement issued by Mr. Putin and Mr. Xi in early February was a clear sign of China’s support, something that Beijing would have been reluctant to give if Mr. Putin was willing to overshadow the Olympics by beginning his assault before the end of the Games, according to people familiar with the British thinking.

Allied intelligence services learned from intercepted communications that senior Russian commanders were being brought together for a meeting, which some Western governments believed was the key decision point for military commanders to begin the attack. This intelligence was part of what led Jake Sullivan, the White House national security adviser, to warn on Feb. 11 that a Russian attack could come before the end of the Olympics. Multiple officials also said at the time that U.S. officials had picked up intelligence that Russia was considering Feb. 16 as the possible date for the start of military action. That prediction turned out to be wrong, though only by a few days