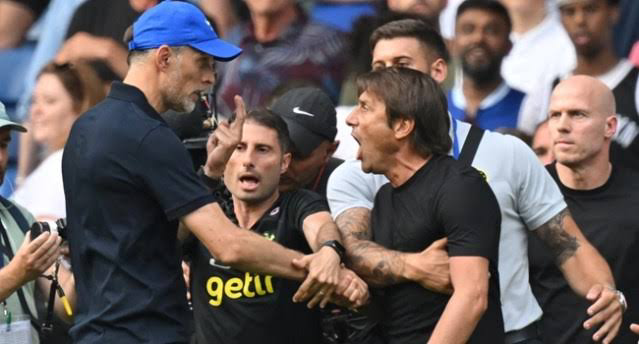 Chelsea manager Thomas Tuchel has been fined £35,000 and banned from the touchline for one match after his altercation with his Tottenham Hotspur counterpart Antonio Conte, who has been handed a £15,000 fine.

Conte has however escaped a suspension.

The two men were charged by the Football Association following their clash last weekend after the Premier League draw between Chelsea and Spurs.

Tuchel and Conte were both sent off by Anthony Taylor after an angry confrontation following the full-time whistle.

The pair had previously clashed after Pierre-Emile Hojbjerg scored Tottenham’s first goal in the match, which ended 2-2 after Harry Kane scored deep into injury time.

Both men played down their altercation after the match.

Tuchel described the clash as “not necessary”.

He said: “I thought when we shake hands you looked in each other eyes, he had a different opinion. It was not necessary but a lot of things were not necessary.”

Conte said he accepted the charge of improper conduct but believes it was a “soft” rebuke and said all parties should “move on”.

“We have to accept and have respect for every decision. But I think sometimes this type of situation can happen. It’s not the first time, it won’t be the last time that two coaches are not in the right way or do not agree.

“But the most important thing is we have to move on, to have respect for each other. And for me, the situation finishes there.

“It wasn’t a big clash. A big clash is a big fight