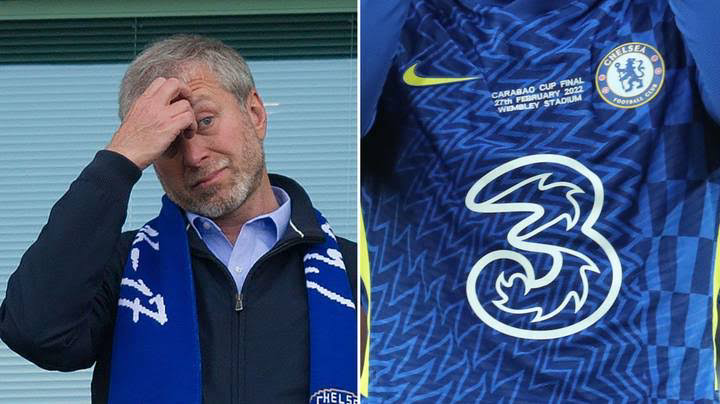 The mobile phone company Three has suspended its sponsorship of Chelsea and asked the club to remove the logo from their shirts with immediate effect.

The news came after Chelsea’s owner, Roman Abramovich, was placed under sanctions by the UK government for being “associated with a person who is or has been involved in destabilising Ukraine and and undermining and threatening the territorial integrity, sovereignty and independence of Ukraine, namely Vladimir Putin, with whom Abramovich has had a close relationship for decades”.

Three said in a statement on Thursday afternoon: “In light of the government’s recently announced sanctions, we have requested Chelsea Football Club temporarily suspend our sponsorship of the club, including the removal of our brand from shirts and around the stadium until further notice.”

The club have been granted a special licence that will allow them to fulfil their fixtures. Broadcast and prize money will be frozen and the licence is limited to “football-related activity”, leading to the ban on signing players and new contracts – and other commercial restrictions. It means Abramovich will need approval from the UK government before selling the Stamford Bridge club.

Three added: “We recognise that this decision will impact the many Chelsea fans who follow their team passionately. However, we feel that given the circumstances, and the government sanction that is in place, it is the right thing to do.”

It is believed that the Three deal was worth around £40m a year to Chelsea and another sponsor, the shirt sleeve sponsor, Hyundai, said it was looking into their deal with the club. “Hyundai has become one of the strongest partners in football over the years and the company supports the sport to be a force for good,” the car manufacturer said in a statement. “We are currently assessing the situation with Chelsea.” The Hyundai deal is reportedly worth £10m a year.

Nike, which agreed a 15-year-deal worth £900m to provide Chelsea’s kit in 2016, said it was not commenting on the day’s Abramovich news, or where it might leave the deal.