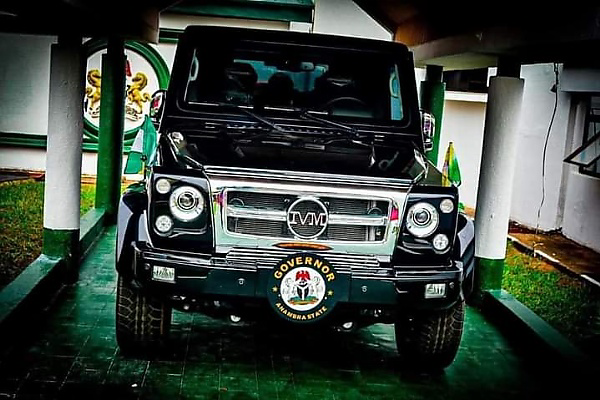 Charles Soludo has become the first Nigerian Governor to use IVM Vehicles as his official automobile after the recently sworn-in governor drove to his inauguration on Thursday in an Innoson vehicle.

The newly inaugurated governor of Anambra State became the first governor in Nigerian to use the Nigerian-made automobile IVM (Innoson Manufacturing motors) produced by Innoson Motors as his official vehicle.

It was earlier reported by Nairametrics that the Governor, in a statement made while he was still governor-elect, said, “Igbo land is one and we must protect it. We want to bring back the zeal of patronizing our own. I have said it even during campaigns, and I meant it, that if I win, the official car of the governor of Anambra State will be Innoson motors.”

He however, kept to his promise of using an indigenous vehicle at his inauguration yesterday. An IVM jeep was used to convey him to the venue of the inauguration as his official vehicle as governor of the state.

The Governor has been very particular about promoting made-in-Nigeria products as seen in his wearing of outfits made by local designers and stating firmly that to induce growth we must support our own.

He stated that the Anambra government will only patronize ‘Made in Anambra products, except in cases where there is no “Made in Anambra alternative.”

In his speech, the governor said that the Government would not rest until every child that is of schooling age is in school, when the cost of living is down to near zero, when the people have access to health care amongst other promises.

This is important as the use of a car that’s locally manufactured would greatly reduce the cost and amount that is spent on importing vehicles, particularly at a time when inflation is at its highest level in developed economies like the US.

This could in turn allow the state budget and allocation from the federal government to be used to satisfy other important needs that the state may have. It is unarguably a cost-effective decision.

The move by the governor to use locally made vehicle could also serve as a boost for local manufacturers, hence improving the Nigerian automobile sector.