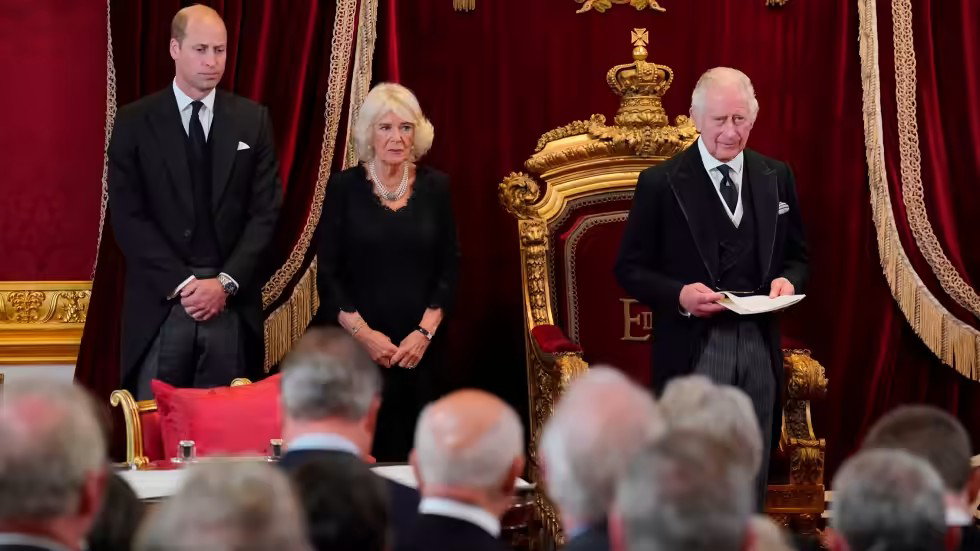 Charles III was formally proclaimed king on Saturday during an Accession Council that was televised for the first time, in an indication of the new monarch’s determination to modernise and streamline the monarchy.

At the ceremonial event in St James’s Palace in London, Charles swore to take on the “heavy responsibility of sovereignty”. Recalling the 70-year reign of his late mother, he pledged to “follow the inspiring example I have been set”. The subsequent public proclamation — made from a balcony of the palace to a trumpet fanfare and a rendition of God Save the King — marked a return to business after a day of mourning for Queen Elizabeth II on Friday, which included an emotional personal address from Charles remembering his “darling mama”.

Flags were flown at full mast at royal palaces across the United Kingdom to mark the proclamation at 11am, and will remain there until Sunday when it will be read in separate ceremonies in Scotland, Wales and Northern Ireland. A crowd of thousands gathered around the Royal Exchange, beside the Bank of England, where at noon on Saturday the Garter King of Arms, David White, read out the proclamation for a second time, flanked by the aldermen of the City of London Corporation and ceremonial guards.

The public proclamations followed the solemn ceremony of the Accession Council in the state apartments of St James’s Palace. The ritual last took place in 1952 behind closed doors. Penny Mordaunt, the cabinet minister who also holds the largely ceremonial position of Lord President of the Council, first read out the formal announcement of the Queen’s death.

Senior Privy Council members, including all six of the UK’s living former prime ministers, then looked on as the proclamation document for King Charles III was signed. William, the new Prince of Wales, was first to sign, followed by Camilla, the Queen Consort, and later the recently appointed prime minister Liz Truss, as well as the Archbishop of Canterbury Justin Welby. Senior members of parliament later swore an oath of allegiance to the king in Westminster; parliament will now not be in session until after the Queen’s funeral, scheduled for 11am on Monday 19 September.

The King announced that the day of the funeral will be a bank holiday across the United Kingdom. The decision to televise the Accession Council was seen as a signal of the King’s desire to put his personal stamp on the institution. The gathering was attended by around 200 of the most senior members of the Privy Council, which advises the monarch and dates to Norman times.

On Friday the new monarch surprised well-wishers gathered outside Buckingham Palace by stopping his car and taking an impromptu walkabout, receiving a kiss on the cheek from at least one mourner.

Later that evening the King gave his first televised speech, which has been warmly received, carefully mixing the political with the personal, paying tribute to his mother while also signalling he would step back from the charities and causes he espoused as heir. Echoing the pledge made by his mother before assuming the throne, the King promised “life-long service . . . Whatever may be your background or beliefs, I shall endeavour to serve you with loyalty, respect and love.”

Following the completion of the constitutional formalities in London, the new King will begin a tour of the UK next week, starting in Scotland where his mother died at Balmoral Castle, her summer retreat in Deeside. As the ceremonies continued in London, preparations were beginning in the Scottish capital Edinburgh to receive the coffin of Queen Elizabeth from Balmoral.

It is set to arrive at the Palace of Holyroodhouse on Sunday, where King Charles is due to receive it, before being processed along the city’s Royal Mile to St Giles’ Cathedral. There the public will have their first opportunity to file past and pay their respects. The Queen’s body will be flown to London on Tuesday. On Wednesday members of the royal family will join the procession as the coffin is transferred the short distance from Buckingham Palace to the Palace of Westminster.

There the coffin will lie in state for four full days in Westminster Hall until the funeral on Monday September 19, which the government confirmed on Saturday would be a bank holiday. After visiting Scotland and participating in a formal ceremony on Monday marking his accession to the Scottish throne, the King and Queen Consort will visit Northern Ireland on Tuesday, Buckingham Palace announced on Saturday. The King will visit Wales on Friday.

Constitutional experts said the death of the Queen in Scotland, where a Scottish National party government is agitating for a second independence referendum, could provide the King with an early opportunity to build on the popularity enjoyed by his mother there.

PREVIOUS POST Wike Mocks Secondus, Says No Amount Of Confidence Votes Would Save Ayu
NEXT POST ASUU’s Demands Can Be Met With One Month Proceeds From Crude Oil – Peter Obi