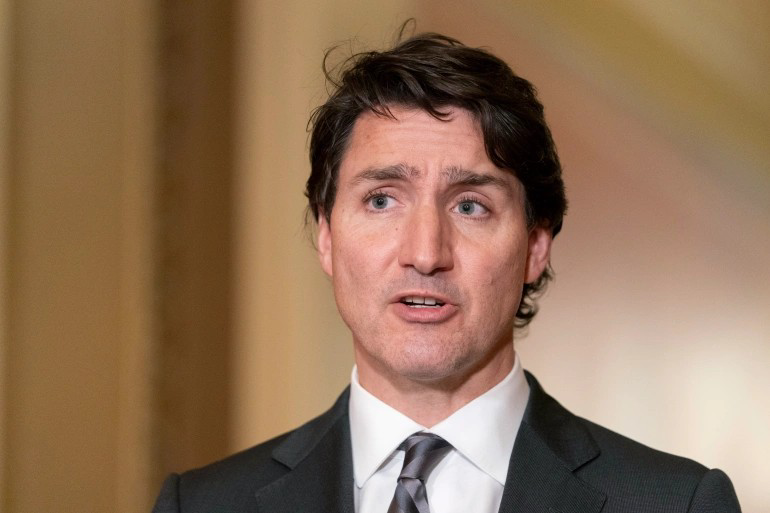 Speaking in Vancouver on Tuesday, Trudeau linked Europe’s effort to move away from Russian oil and natural gas after the country’s invasion of Ukraine to a broader, global push towards renewable energy.

“The leaders I spoke with in Europe over the past few weeks were clear: They don’t just want to end their dependence on Russian oil and gas, they want to accelerate the energy transformation to clean and green power,” Trudeau told reporters.

“The whole world is focusing on clean energy,” he said, “and Canada cannot afford not to do that.”

The government also says it will work closely with provinces and territories to develop an approach to cap oil-and-gas sector emissions to achieve net-zero emissions by 2050 and reduce oil-and-gas methane emissions by at least 75 percent by 2030.

Trudeau has been hailed as a climate leader internationally, pledging to cut Canada’s emissions and invest in cleaner energy. But his Liberal government has been slammed for backing the expansion of oil pipelines and other energy projects that critics have said would worsen the climate crisis.

Last year, the Liberals set a new target of slashing carbon emissions by 40 to 45 percent below 2005 levels by 2030. But an independent parliamentary watchdog concluded that Ottawa had not done enough to reach that goal, after poring over decades of government climate actions that yielded an increase in emissions.

Environment Commissioner Jerry DeMarco said in November that Canada was ranked the “worst performer” among the G7 industrialised nations in cutting emissions.

While Canada represents about 1.6 percent of global CO2 emissions, it is among the top 10 largest emitters globally and one of the highest emitters per capital

Trudeau’s new emissions reduction plan comes just days after his government last week announced it would raise oil and gas exports this year by up to 300,000 barrels per day – an increase of about 5 percent.

Canada, home to the tar sands of northern Alberta, is the fourth-largest oil producer in the world after Russia, Saudi Arabia and the US, and for weeks, pro-oil Canadian politicians have called for the expansion of fossil fuel projects in response to the Ukraine crisis.

On Tuesday, environmentalists welcomed Ottawa’s plan, but said they would be watching its implementation closely.

“The government’s new plan marks the first time that the oil and gas sector is being asked to significantly reduce emissions, even if it still isn’t enough and is more focused on public funding of risky techno-fixes than the proven solution of transitioning to clean energy,” Keith Stewart, senior energy strategist at Greenpeace Canada, said in a statement.

“Given three decades of successful oil industry lobbying against implementation of past climate plans, it is vital that people hold all politicians’ feet to the fire to make sure they force industry to do its fair share. We need real action this time.”Lipton Extra StrongExtra Strong, Intense taste and AromaAd by Lipton See More

Canada’s West Coast Environmental Law Association also said the plan does not show “a complete path” to the reductions promised, but was a good step that provides more accountability to ensure the government meets its commitments.

“Canada has failed to meet every single climate target it has set for itself,” Anna Johnston, a staff lawyer with the group, said in a statement. “Hopefully, we stay on track, and even increase our ambition to the 60 percent reduction needed for us to do our global fair share.