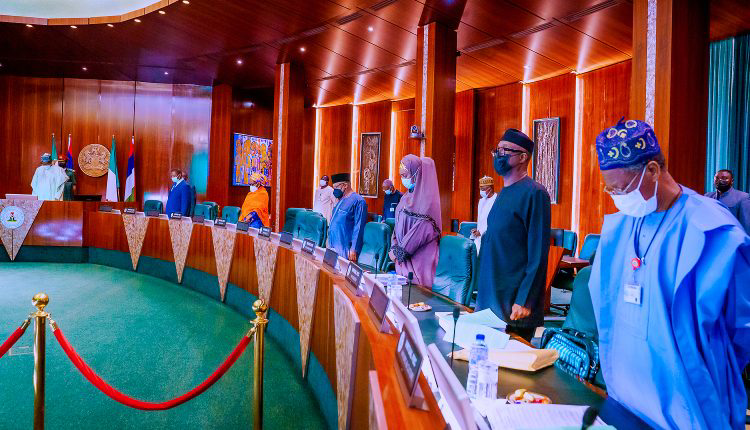 The Federal Executive Council has observed a minute silence in honour of Nigerians who lost their lives in Monday’s train attack in Kaduna State.

Secretary to Government of the Federation, Boss Mustapha reminded the council of the unfortunate incident, shortly before the commencement of the meeting.

He said: “Bandits had laid improvised explosive devices on the rail tracks and a passenger train was demobilised on Monday, leading to the death of eight Nigerians. 46 others sustained various degrees of injury and some were kidnapped but the exact number of the kidnapped is yet to be established.”

Meanwhile, President Muhammadu Buhari is presiding over the virtual meeting, of the Federal Executive Council, holding at the council chambers of the State House, Abuja.

Vice President Yemi Osinbajo, Secretary to Government of the Federation, Boss Mustapha and Chief of Staff to the President and Professor Ibrahim Gambari are among those physically attending the meeting, which started at 09:00 GMT.

Also present are The Head of Civil Service of the Federation, Dr Folashade Yemi-Esan, Ministers of Information and Culture, Lai Mohammed, Finance, Budget and National Planning, Zainab Ahmed, Justice, Abubakar Malami, and that of Works and Housing, Babatunde Fashola.

The Head of Civil Service of the Federation, Dr Folashade Yemi-Esan and other Ministers are attending virtually from their various offices in Abuja