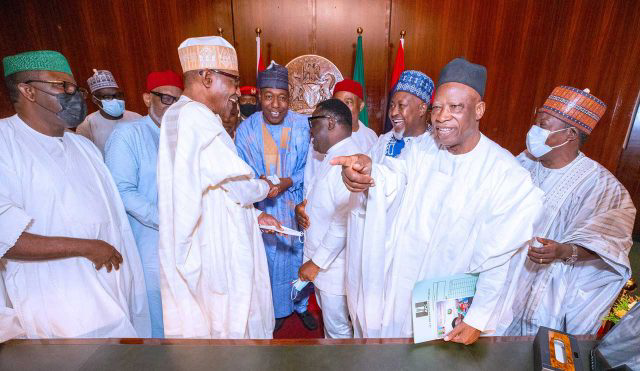 Just as it was in the days leading to the national convention of the ruling All Progressives Congress (APC), which saw Senator Abdullahi Adamu emerge as the national chairman in March, President Muhammadu Buhari, yesterday, met with the 22 APC governors, where he announced to them he would once again, provide leadership ahead of the party’s presidential primary next Monday.

The governors, who met with the President at the Council Chambers of the State House, shunned newsmen, who approached them for the outcome of their closed-door meeting.

While the governors of Imo, Hope Uzodinma; Ogun, Dapo Abiodun and Kano, Abdulahi Ganduje, were seen discussing with Secretary to the Government of the Federation, Boss Mustapha, outside the council chambers, the other governors also ignored media overtures, as they filed out of the State House immediately the meeting ended.

All the APC governors were in attendance except Governor Nasir el’Rufai of Kaduna State, who was represented by his deputy, Hadiza Sabuwa Balarabe.

At the meeting, President Buhari stated the factors he would consider in supporting a presidential candidate among the 23 persons seeking to fly APC’s flag. “Our objective must be the victory of our party and our choice of candidate must be someone who would give the Nigerian masses a sense of victory and confidence even before the elections so that the party could retain power at the centre,” he said.

In a statement by his spokesman, Femi Adesina, the President told the governors and the national chairman of the party: “The processes for the 2023 general elections have commenced in earnest and I note that the most successful political parties, globally, have always relied on their internal cohesion and a strong leadership brand to achieve bigger electoral fortunes.

“As I begin the final year of my second term as President of the Federal Republic of Nigeria and leader of the party, I recognise the compelling need for me to provide stronger leadership to the party under this transition process and to ensure that it happens in an orderly manner.

“Such leadership is required so that the party remains strong and united. It is also needed to improve our electoral fortunes by ensuring that it retains power at the center, hold the great majority in various legislative chambers and also gain additional number of states.”

The President appealed to all the governors “to allow our interests to converge, our focus to remain on the changing dynamics of our environment, the expectations of our citizens and the global community. Our objective must be the victory of our party and our choice of candidate must be someone who would give the Nigerian masses a sense of victory.”

President Buhari assured that the consultation process will continue to ensure that all aspirants and stakeholders would be brought on board right through to the convention, stressing that it would also ensure that any anxiety occasioned by different factors are effectively brought under control, “and that our party emerges stronger.”

Speaking on behalf of the governors, Atiku Bagudu of Kebbi State and chairman of Progressive Governors’ Forum, said the party must build on successes of its recent elective convention and the primaries conducted so far, “and come up with a candidate who will walk in the footsteps of patriotism and love for the country, which Mr President has shown. We will support Mr President to have a very successful convention,” he pledged.

The President left for Spain immediately after the meeting at the invitation of the Spanish President, Pedro Sanchez, thus leaving the governors to discuss his message.

IMMEDIATELY after the meeting with the President, the progressives governors went into another closed-door meeting to discuss President Buhari’s choice of successor.

It was gathered that the governors’ meeting ended in a dead end, yesterday evening, after which they reconvened at 8:00p.m. to discuss further.

According to a source, the governors were unable to agree on how to implement the President’s request.

“We believe that the President has not settled for any one person in particular and that is why some governors felt that the best they could do was nominate two aspirants (one from the North and one from the South) for the President’s consideration,” the source said.

However, the source said that many Northern governors argued that no Southern aspirant could defeat Atiku Abubakar, the PDP’s presidential candidate in the presidential election next year; so preference should be given to the North.

THE Senate President, who is also a presidential aspirant, Ahmad Lawan, has thrown his weight behind the decision by President Buhari to anoint the flag bearer of the party. Lawan, who spoke to reporters after he was screened said it behooves the party stalwarts to support the President’s choice.

He said: “We are sons and daughters of the same father and mother, those of us in APC, all of us who took the forms to run for the highest office, believing in the same philosophy and ideology of our party. Therefore, we are one and the same thing.

“I will support anybody who the President thinks can do better for us. I have no problem with that. I want to also believe that at the end of the day, I will emerge.”

Lawan who expressed satisfaction with his performance during the screening session, saying he has the wherewithal to administer the country if voted into power in the 2023 polls.

THE Vice President after his screening by the panel, yesterday, at the Transcorp Hilton Hotel, Abuja, expressed optimism on the party’s chances.

Speaking with newsmen, he said: “We were able to discuss several issues; issues of national and party concerns; and it went very well indeed; we had a very good chat. Of course, we are ahead of any party; way ahead, APC is ahead.”

Senator Babafemi Ojudu, the Special Adviser on Political Matters to President Buhari, who accompanied Osinbajo to face the Chief John Odigie-Oyegun-led panel, said the Vice President has all it takes to effectively administer the country, adding that Osinbajo is well prepared to slug it out with his rivals at the party’s presidential primary starting on Monday next week.

Senator Kabiru Gaya, who leads the Osinbajo support groups, spoke in the same light, adding he remains the best candidate the APC can parade to sweep the poll.

As at 5:00 p.m. yesterday, the panel had screened the Senate President, Ahmad Lawan; Prof Osinbajo, Governor Yahaya Bello and the Minister of Niger Delta Affairs, Senator Godswill Akpabio, Dimeji Bankole, among others.

THE crisis rocking the ruling party deepened, yesterday, as two key members of the National Working Committee (NWC) threatened to reject the outcome of the ongoing screening of presidential aspirants and other decisions ahead of the national convention of the party.

APC’s National Vice Chairmen Northwest, and Southwest, Salihu Lukman and Isaac Kekemeke in a joint statement titled: ‘APC and the need for vigilance: Urgent call for intervention,’ argued that their position was based on the fact that the National Chairman of the party, Adamu, had usurped the powers of the NWC.

They contended that Adamu’s conduct was not only a breach of the party’s constitution but is clearly a deliberate attempt to foist a fait accompli on the NWC on fundamental issues that affect the party.

They noted: “As a party, we have suffered enough judicial embarrassments arising from clearly avoidable leadership breach of our party’s constitution and spelt out rules. As members of the NWC who have the mandate of our members, we hereby serve notice to His Excellency, Abdullahi Adamu, and through him to all APC leaders that henceforth, any decision taken by the National Chairman or any other party functionary, which require the approval of the NWC as enshrined in the APC constitution, will be considered as illegitimate and an infringement on the jurisdictional scope of the NWC, unless otherwise confirmed as validly approved decisions of the NWC or any other legitimate organ of the party.

“No NWC member was elected at the March 26, 2022 National Convention to warm seats or offices in the National Secretariat. We, therefore, call on all our colleagues in the NWC to rise to these challenging situations by joining hands with us to save our great party and return it to its founding mission of moving Nigeria forward based on honest, fair, just and selfless commitment to party building. God bless our party.”

Continuing, they stressed: “Within just two months in the lifespan of the new leadership of our great party, the NWC, organ of the party vested with the power of managing the day-to-day affairs, including implementing decisions of the National Executive Committee (NEC), as provided in Article 13.4 of the APC Constitution, has been rendered redundant.

“The National Chairman takes decisions unilaterally. When it suits him, he invokes the name of our leader, President Buhari to blackmail NWC members into accepting his decisions. Every effort to get the Chairman to respect the authority of the NWC as elected by the March 26, 2022 APC National Convention is proving very difficult, if not impossible. Note that NEC’s donation of its powers was to NWC and not to the National Chairman or any individual.

“We, therefore, have no option but to make this public appeal to all APC leaders to intervene please urgently to call our National Chairman to order, immediately. The National Chairman must be properly reminded to recognise that the business of managing the day-to-day affairs of the party is the responsibility of the NWC as provided in provisions of the APC Constitution. He is free to consult any party leader(s).

“Such consultations will not represent decisions of the NWC or any organ of the party unless and until it is adopted by a properly constituted meeting of the NWC or organ in question according to the letters and spirit of the APC constitution.”

MEANWHILE, a chieftain of the party, Gbenga Olawepo-Hashim, has cautioned that APC has a higher responsibility not to allow its presidential primary to become “another dollar rain and a trading platform for the highest bidder.”

In a statement from his media office in Ilorin, Olawepo-Hashim explained that “our country is neither a commodity to be traded, nor a property to be auctioned and sold to the highest bidder.”

According to him, “the PDP has demonstrated that it has learnt nothing, but as a party, the APC cannot follow her inglorious example.”

The former presidential candidate noted that “national interest is what should guide the choice of the APC and some of the urgent national imperative should include shortlisting a candidate that will heal the wounds of division in the country and finding also a Vice that will complement him/her in this national objective.”