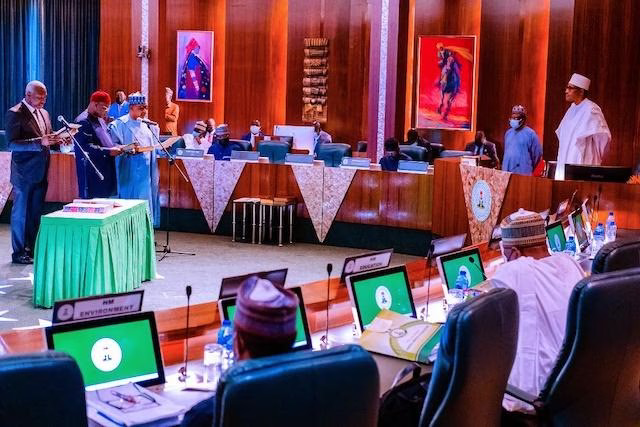 President Muhammadu Buhari on Wednesday reshuffled his cabinet, as seven new ministers recently screened and confirmed by the Senate took their oath of office.

The President swore in the ministers as he presided over the regular Wednesdays Federal Executive Council (FEC) meeting.

The President later assigned the new Ministers with their portfolios, in which he also made some minor cabinet changes

In the new arrangement, Adeleke Mamora, was moved from office of Minister of State, Health, to head the Ministry of Science, Technology and Innovation, as full fledge Minister.

Mua’azu Sambo, was named new Minister of Transportation, while Umanna Okon Umanna, assumed headship of the Niger Delta Ministry as the substantive Minister.

Sharon Ikeazor, was moved from the Ministry of Environment to Minister of State for Niger Delta

Umar Ibrahim El- Yakub, assumed office as the new Minister of State for Works and Housing.

Ekunmankama Joseph Nkama , one of the newly appointed Ministers, was posted to the Ministry of Health, as Minister of State.

Ikoh Henry Ikechukwu was made the Minister of State, Science , Technology and Innovation

This is just as Odum Udi, takes over as Minister of State for Environment

Ademola Adewole Adegoroye, was posted to the Ministry of Transportation, as the Minister of State.

Before the swearing in, a minute silence was observed in honour of Mohammed Barkindo, the 4th Organisation of Petroleum Exporting Countries (OPEC Secretary-General, who died at the age of 63, Tuesday night.

Those who physically attended the FEC are the Vice President, Yemi Osinbajo; Secretary to the Government of the Federation (SGF), Boss Mustapha; and Chief of Staff to the President, Prof Ibrahim Gambari.