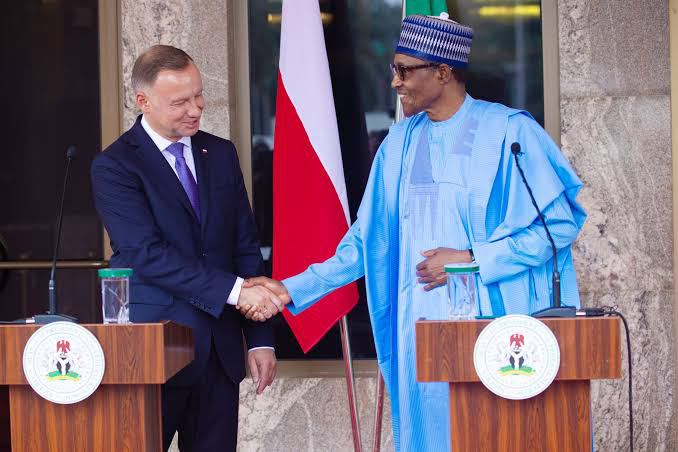 Nigeria and Poland have signed agreements on agriculture and gas to address food and energy security occasioned by the Russia-Ukraine war, as both strengthen countries’ 60-year-old bilateral relations.

President Muhammadu Buhari and Andrzej Duda, his Polish counterpart, signed the deal on Tuesday at the presidential villa, Abuja.

Duda described the agreement as necessary in light of the food security crisis in the aftermath of the Russian invasion of Ukraine.

Speaking about the energy security dimension and to further develop the cooperation, the Polish president noted that Nigeria, being rich in gas, will ensure a steady increase in the supply of LNG and oil from Nigeria to Poland and the European Union.

President Duda, who spoke through an interpreter, stressed that it was the first official visit paid to the Federal Republic of Nigeria in 60 years since both countries established diplomatic relations.

“And for that very reason, this is a truly important visit to me. And once again, let me stress, is a huge honour, Your Excellency,” he said.

Duda said both countries talked about furthering and deepening the relations between the two countries.

“Nigeria is the only African country with which Poland has signed an agreement on Strategic Dialogue. And actually, a very good part of this strategic dialogue is the memorandum of cooperation in the area of agriculture that we have just signed a couple of minutes ago,” he said.

“It is an immensely important piece of document, especially in the light of the food security crisis that is faced right now. And not only by Nigeria but also by the entire African continent.

“And the 10 most pivotal aspects that we raised in our conversation today both in our private tet-a-tet meeting with Mr President, as well as during the plenary session was how to provide food security and energy security nowadays. Both of these topics, of course, stem from the situation that we are faced with today in Europe and to be more precise in our part of Europe. That is the aftermath of the Russian aggression and the war in Ukraine.

“As the country that is also a member of the United Nations, it is so important to support Ukraine in its export of grain and food products out of the country. But it’s equally a burden to us to provide our support to Africa and in particular to our partner country, that is Nigeria.

“And that is why it’s so important to us to further strengthen the relations between Poland and Nigeria right now. And one element in strengthening that relationship is the memorandum that we have signed today.

“It is very important for the future of our relations, but also for the future of the food security in Nigeria and at large. It can also contribute to the modernization and increasing the efficiency of the Nigerian economy and Nigerian agriculture but it also can serve as a vehicle for sharing experiences.”

Speaking on the energy security dimension, Duda said the talks held were essential from the perspective of supplying both LNG gas as well as oil to Poland and the European Union.

“And speaking about those natural resources, Nigeria is indeed very wealthy. And I want to also add that the first is applies of the LNG gas to our LNG gas terminal from Nigeria had already happened, just like the import of crude oil performed by our oil company Latos,” he added.

“Those shipments did happen in recent years. And that means well for the future because we do want to further develop this cooperation, we want to increase the supplies from Nigeria to Poland. And by this way, we also want to contribute to the development of economic relations between both our countries.”

He expressed hope that the that the political talks will yield a very fruitful outcome in the meeting that he will have with representatives of business sectors, both from Poland and Nigeria.

On his part, Buhari thanked the Polish government for opening its arms to Nigerian students whose studies were truncated by the Russia-Ukraine crisis; offering them opportunities for continued education.

He noted that both countries have reached agreements to increase collaboration in agriculture, energy and defence.

After the briefing, Buhari and his host proceeded to the state house Banquet hall for lunch.