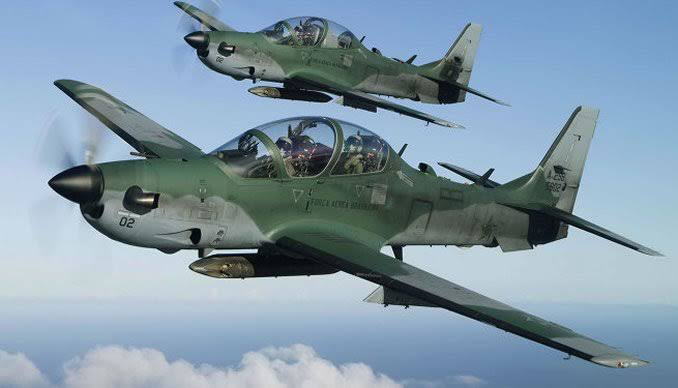 Garba Shehu says president Muhammadu Buhari may face war crime charges at the International Criminal Court in the Hague if he deploys the newly acquired Super Tucano aircrafts against bandits masterminding deadly attacks in the north.

The president’s spokesperson, who made the disclosure on Trust TV, stressed that Mr Buhari cannot afford to breach the terms of agreement drafted by the United States, for the 12 fighter jets to avoid litigation at the expiration of his tenure.

“The president is responsible. If he finishes now, we want him to go and rest in Kaduna or Daura, we don’t want him to go to the International Criminal Court, that is not the idea,” said Mr Shehu

The presidential aide suggested that the issue of banditry should be tackled by the military whose strategies over the years have failed to curb the activities of bandits now running amok in northern Nigeria.

“We should allow the military to use their methodical process for dealing with these things, let them do it,” Mr Shehu said.

The presidential aide emphasised that the U.S. laws prohibit the use of weapons against civilians while hinting that Nigeria would lose its purchasing power if it violated these laws.

“When you are dealing with countries like America, you have to be sensitive to public opinion which is as important to them as it is to us. Yes, it is clear when they sold the Super Tucano to the government of Nigeria. They were looking at the law.

“The law does not allow you to use weapons on targets they classify as civilians otherwise America will no longer sell weapons to you. Don’t forget that it took a buildup of years of rejection until President Buhari came on the scene and was able to establish credibility with America and they said they would sell,” the presidential aide said.

Furthermore, Mr Shehu said, “It is true that from the beginning, the Air Force could not use the aircraft in the North West and even after that, it took some time because these things also use precision type weapons. From my own understanding, these were not to be made available until March, we are just into April.”

In November 2021, the Abuja division of the Federal High Court proscribed bandits groups as terrorists sects which attracted heavier sanctions.

The proscription had yet to yield fruitful results as bandits have become brazen in their attacks. A group of bandits in March attacked the Kaduna airport and bombed the Abuja-Kaduna train, killing and abducting several passengers aboard.

It is unclear why Mr Buhari had yet to deploy the Tucano jets against bandits despite prescribing them as terrorists.

Mr Buhari’s acquisition of the Tucano jets and refusal to deploy the weapons, have raised concerns about the regime’s perceived bias and unwillingness to fight his kinsmen.

Katsina state governor, Aminu Masari had in 2021 admitted the rampaging bandits were of the Fulani tribe.

“Majority of those involved in this banditry are Fulanis. Whether (this revelation) is palatable or not, but that’s the truth,” asserted Mr Masari in a Channels TV programme