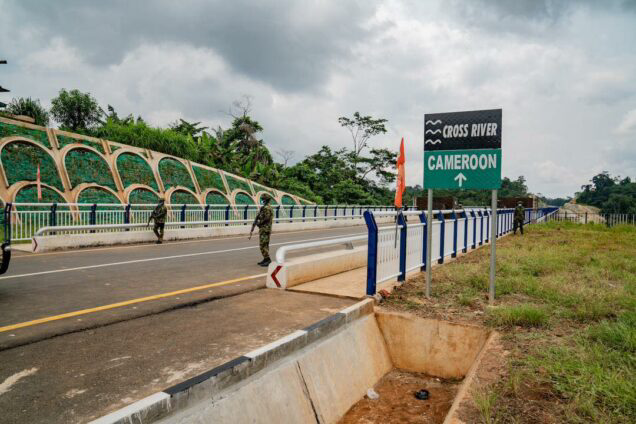 PRESIDENT Muhammadu Buhari has commissioned the newly constructed border bridge linking Nigeria and Cameroon, including a joint border post for seamless trade and migration between the two countries.

Performing the ceremony, the duo said the link bridge project would deepen socio-economic and diplomatic relations between Nigeria and Cameroon, while the Joint Border Post would not only strengthen the existing cordial relations but enhance the volume of economic activities in the region, as well as movement of persons, goods and services with countries along the corridors.

In a statement released by the Deputy Director of Press, Ministry of Transportation, Ogbonna Anastasia, Friday, Buhari, who was represented by the Minister of Foreign Affairs, Ambassador Zuberu Dada, said that the development would provide a veritable synergy between inter-country regions to combat the teeming security challenges bedeviling the countries.

According to him, it will also serve as a vital link between the Western and Southern African regions. The Federal Republic of Nigeria also expects that this Joint Border Post and bridge will enhance security patrol and facilitate effective cooperation in this part of our border with the Republic of Cameroon.

It is also our hope that it will complement the efforts of the Governments of Nigeria and Cameroon to combat the scourge of terrorism and violent extremism in our region”, he added.

On his part, President Biya of Cameroon, who was represented by his Minister for Public Works, Emmanuel Nganuo Djours, stated that: “the construction of the bridge over Cross River is part of the Transport Facilitation Program on the Bamenda – Manfe – Abakaliki – Enugu – corridors. The corridor covers 441 metres of road that will facilitate trade and strengthen relations between Cameroon and Nigeria.”

Meanwhile, Nigeria’s Minister of Works and Housing, Babatunde Raji Fashola (SAN), who expressed delight over the completion of the project, said the bridge would play a significant role in networking several cities across Africa.

Nigeria’s Minister of State for Transportation, Nigeria, Prince Ademola Adegoroye, who hailed the roles of international development agencies and partners in the project, stressed that inter-governmental agencies of both countries, such as Customs, Immigration and others should work in synergy to promote mutual benefits and healthy coexistence between both nations.

He said: “the main objective of this project is for better trade facilitation between both countries by combining customs clearance and other activities in one place to achieve economies of scale, simplify customs procedures and increase cooperation and coordination of controls amongst others.

The Governor of Cross River State, Prof. Ben Ayade, represented by his Commissioner for Works, Hon. Dan Osim Asu, commended the governments of Nigeria and Cameroon for the remarkable project that will boost commerce and industry along the frontier states.