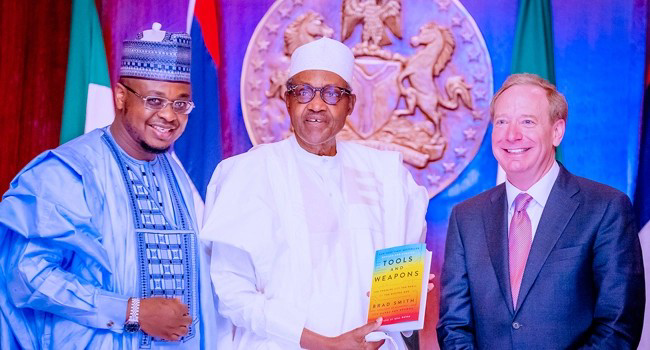 President Muhammadu Buhari says Nigeria is poised to welcome more initiatives and investments in digital technology and is appreciating Microsoft for the $200 million African Development Centre located in Lagos.

The President said this on Friday at the statehouse in Abuja when he received the President of the Microsoft Corporation, Mr Brad Smith in the company of the Minister of Communication and Digital Economy Mr Isa Pantami.

Giving his remarks, the Microsoft President said the company plans to train five million Nigerians in the future, noting that 60,000 people have already enrolled for the courses while another 300,000 have completed some courses.

“I have been informed that the African Development Centre in Nigeria is Microsoft’s first engineering hub in Africa as the current investment stands at about $200 million.

“I have also been informed of Microsoft’s skilling initiative that aims to train five million citizens and provide 27,000 jobs over the next three years. These initiatives are commendable and I urge you to expand them and continue to prioritize Nigeria as you roll out your global initiatives,” President Buhari was quoted as saying in a statement by his Special Adviser on Media and Publicity, Femi Adesina.

President Buhari told the visiting Microsoft team that as the largest economy and most populous country in Africa, Nigeria was positioned to play a strategic role in the global technology ecosystem and seek the right partnerships to harness the potentials.

He said one of such key partnerships was in the area of capacity building.

This administration, according to the President, has shown great commitment in providing a conducive environment for investors and the massive jump in the Global Ease of Doing Business Ranking was proof that the efforts were yielding positive results.

“Our emphasis on the development of our Digital Economy has also positioned the sector as a prominent factor in the Nigerian economy. As the fastest growing sector of the Nigerian economy in 2020, the Information and Communications Technology sector played a very important role in supporting our country to exit the recession triggered by the COVID-19 pandemic.

“We are keen to build on the momentum as we continue to implement our National Digital Economy Policy and Strategy, along with other related policies.”

Apart from partnership in the area of skills building, President Buhari said he looked forward to further partnerships that will support the digital infrastructure and innovation ecosystem, with regard to emerging technologies.

I believe that this meeting will provide an opportunity to discuss how the Nigerian government can support the growth of your business here and how Microsoft can contribute to the growth of our economy through the active support of our policies and programmes,’’ he added.

He affirmed that he launched the Nigerian National Broadband Plan on the 19th of March 2020, with the aim of expanding broadband access across Nigeria and Microsoft’s connectivity initiative aligns with the plan.

According to him, “I believe it would be very useful and mutually beneficial to both Microsoft and Nigeria if your connectivity project is expanded beyond the current four locations in this country.

“Emerging technologies play a key role in digital transformation in the Fourth Industrial Revolution and a number of indigenous companies have developed very useful solutions. We are willing to partner with Microsoft to make Nigeria the epicentre for innovative emerging technology in Africa.

The President commended the Minister of Communications and Digital Economy and all industry stakeholders for their support for the sector.

“In order to sustain the momentum, I further direct that you and other stakeholders in the technology ecosystem keep the government fully informed of your ongoing and proposed activities that support the growth of our digital economy.

“We have the potential of becoming your most lucrative market in Africa. As such, we urge you to continue to support the development of our digital economy. We also urge you to step up your Corporate Social Responsibility programmes and support for Research and Development that will enhance your services in Nigeria and on the African continent,” the President said.

In his remarks, the Minister of Communications and Digital Economy said he represented President Buhari at the commissioning of the African Development Centre, adding that Microsoft had over 200 Nigerians working for them in the country, and Seattle.

Prof. Pantami noted that 320,000 Nigerians have also been trained in digital skills by the technology company.

The President of Microsoft and Vice Executive Chairman said the company will keep creating jobs to help build technology that will change the world, noting that the “multi-tasking approach’’ also stretches to digital infrastructure.

“We pledge to train five million people in Nigeria in the future,’’ Smith said, noting ‘60,000 people had already enrolled for courses while 300,000 had completed various courses.’”

The President of Microsoft said the company had gone into partnership with other companies to increase Internet and broadband penetration, while efforts have been advanced in innovating technology that will fight corruption and preserve cultural heritages, like languages.

See the photos below.