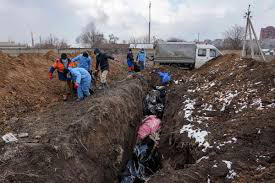 Global outrage is mounting over the discovery of dozens of bodies, some with their hands bound, in towns near the Ukrainian capital after invading Russian troops retreated from the area.

Ukraine has accused Russia of carrying out the killings in towns near Kyiv, including in Bucha, Irpin and Hostomel, with President Volodymyr Zelenskyy branding Russian forces as “murderers, torturers and rapists” who were committing “genocide” in his country.

Russia, however, has denied the claims.

Its defence ministry accused Ukraine of falsifying the images of corpses in “another production” for Western media.

Western nations have voiced horror at the images, with some calling for more sanctions against Russia and others backing a war crimes inquiry by the International Criminal Court (ICC).

Here is a roundup of world reactions:

UN Secretary-General Antonio Guterres said he was “deeply shocked” by images of dead civilians in the Ukrainian town of Bucha.

An independent investigation that “leads to effective accountability” is essential, he said.

US Secretary of State Antony Blinken said the images coming out of Bucha were “a punch to the gut” and promised to help Ukraine document “war crimes” being committed by the Russian troops.

“There needs to be accountability,” he told CNN. “But I think the most important thing is we can’t become numb to this. We can’t normalise this. This is the reality of what’s going on every single day as long as Russia’s brutality against Ukraine continues.”

The UN human rights chief has expressed her horror at the images of dead bodies in the town of Bucha.

“I am horrified by the images of civilians lying dead on the streets and in improvised graves in the town of Bucha in Ukraine,” Michelle Bachelet said in a statement on Monday.

Jens Stoltenberg, the secretary-general of NATO, said the graphic images coming out of Bucha show “a brutality against civilians we haven’t seen in Europe for decades”.

He told CNN’s State of the Union that “it’s absolutely unacceptable that civilians are targeted and killed” and that it was Russian President Vladimir Putin’s responsibility to stop the war.

Stoltenberg said it was “extremely important” that the ICC opens an investigation into potential war crimes in Ukraine and that those responsible are held to account.

President of the European Council Charles Michel pledged further sanctions on Moscow as he condemned “atrocities” carried out by Russian forces outside Ukraine’s capital Kyiv.

“Shocked by haunting images of atrocities committed by Russian army in Kyiv liberated region #BuchaMassacre,” he wrote on Twitter.

“EU is assisting Ukraine & NGO’s in gathering of necessary evidence for pursuit in international courts.”

The EU’s foreign policy chief, Josep Borrell, also expressed shock at the news of “atrocities committed by Russian forces” and said the bloc will assist Ukraine in documenting war crimes.

British Prime Minister Boris Johnson said Russia’s alleged attacks on Ukrainian civilians in towns on the outskirts of Kyiv “are yet more evidence that Russian President Vladimir Putin and his army are committing war crimes in Ukraine”.

Johnson called the attacks in the towns of Irpin and Bucha “despicable” and said he “will do everything in my power to starve Putin’s war machine”.

Johnson added that the UK will step up its sanctions and military support for Ukraine, but did not provide details.

“Putin and his supporters will feel the consequences” of their actions, Scholz said in a statement, adding that Germany will “continue to make weapons available to Ukraine so the country can defend itself against the Russian invasion”.

He also called for international organisations such as the International Committee of the Red Cross (ICRC) to be allowed access to the affected areas to independently document the “atrocities”.

German Defence Minister Christine Lambrecht also called for a “response”, saying “such crimes must not remain unanswered”. She said the EU must discuss the banning of Russian gas.

German Foreign Minister Annalena Baerbock said the “images from Bucha are unbearable” and added that “Putin’s uninhibited violence is extinguishing innocent families and knows no boundaries”.

French President Emmanuel Macron expressed solidarity with Ukrainians, while describing the images coming out of Bucha as “unbearable”.

Polish President Andrzej Duda called on Western allies to provide more weapons to Ukraine, saying the “pictures from Bucha disprove the belief that we have to seek a compromise at any cost”.

“In fact, the Defenders of Ukraine need three things above all: weapons, weapons and more weapons,” he wrote on Twitter.

Italy’s Foreign Minister Luigi Di Maio told Italy’s Rai 3 channel that the events in Bucha were “unleashing a wave of indignation that will lead to new sanctions”.

He said there “could be a debate on the issue of imports of hydrocarbons from Russia” and that Italy would not veto a fifth package of sanctions.

Canadian Prime Minister Justin Trudeau called the killings in Bucha “egregious and appalling” and said Russia must be held to account.

“We strongly condemn the murder of civilians in Ukraine, remain committed to holding the Russian regime accountable,” Trudeau wrote on Twitter.

“It is impossible to remain indifferent in the face of the horrific images from the city of Bucha,” he wrote on Twitter

“Intentionally harming a civilian population is a war crime and I strongly condemn it,” he said.

Japanese Prime Minister Fumio Kishida also condemned the attacks on civilians in towns near Kyiv, describing them “as violation of international law”.

Kishida said “Japan will firmly carry out what it should do” while cooperating with the international community in possible further sanctions against Russia.

New Zealand’s Prime Minister Jacinda Ardern described the reports of rape and other atrocities by Russian troops in Ukraine as “reprehensible”.

“Russia must answer to the world for what they’ve done,” she told reporters in the New Zealand capital, Wellington.

She said her cabinet is considering further measures New Zealand could take to support Ukraine and send a strong message to Russia.

“Certainly, what we as an international community are seeing are evidence of war crimes at the hands of Russia,” Ardern said.

“Ultimately it is for the International Criminal Court to make that determination, but the evidence is there and New Zealand is supporting the prosecutors in gathering that evidence and making sure that Russia is held to account,” she added