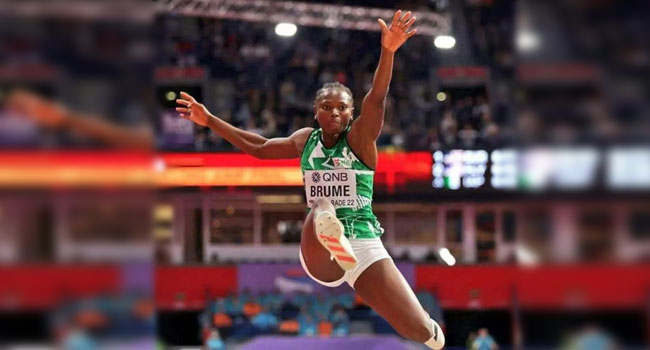 Ese Brume has returned Nigeria to the World Indoor Championships podium for the first time in 14 years since Olusoji Fasuba won the 60m gold in Valencia.

The 25-year-old leaped a huge 6.85m personal season’s best in the third round at the Belgrade event to clinch the silver medal behind the pre-championships favourite, homegirl Ivana Vuleta who took early command of the event with a 6.89m best in the second round before improving top 7.06m in the fourth round.

With this achievement, Brume has become the third Nigerian to win medals at World Athletics Championships indoors and out, as well as at the Olympics behind Glory Alozie and late Sunday Bada.

In addition, she has become the third long jumper to win a World Indoor title after Paul Emordi in 1987, and Chioma Ajunwa in 1997. Brume began her quest for a podium finish with a 6.22m effort.

She later improved to 6.47m in the second round before producing the huge leap in the third that eventually placed her on the podium.

Further efforts to turn silver to gold were futile as she could only jump 6.66m, 6.76m, and 6.67m in the fourth, fifth and final round.

The performance moved her to the top of the African and Nigerian indoor list for the year, and fourth in the African all-time list behind Chioma Ajunwa (6.97m), Blessing Okagbare (6.87m), and Sierra leone’s Eunice Barber (6.86m).

Meanwhile, Ruth Usoro has set a new personal season’s best of 6.69m to place eighth in the final classification, a huge lift for the 24-year-old who has had an indifferent collegiate indoor season.

The Nigerian 4x400m relay team failed to make it to the final after running a personal season’s best time of 3:09.55.

With Brume’s silver medal win, Nigeria has now won 12 medals in the history of the championships with two gold, seven silver, and three bronze medals.

PREVIOUS POST British Royals Get the New Range Rover new model not due until next month Ahead Of Other Customers
NEXT POST EFCC grants Obiano bail, says nothing political about arrest