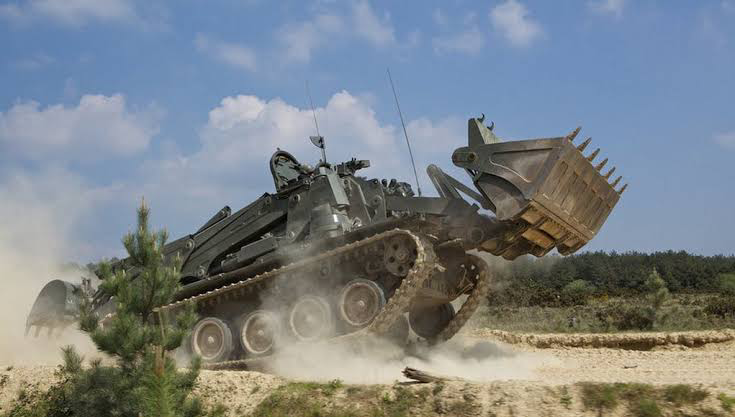 British Army demonstrates automated armored vehicles that could be deployed in future wars.

Terrier [armored engineering robotic vehicle] as well as ATLAS [automated armored land vehicle], were shown off during the tests.

The govt has already signed several contracts to provide full ground and air automated supply systems for the tactical battlefield.

The British Army is preparing to keep up with modern developments in the field of military robotic and autonomous systems. On March 10, the British military demonstrated its automated armored vehicles, engineering, air, and ground platforms, at the Salisbury Military Plain,

According to the plans of the British military, by the end of 2025, the British Army should have built the first light brigade combat team of robotic and autonomous systems.

“Defending the United Kingdom against future adversaries requires an innovative and flexible approach,” said a statement released by the British Ministry of Defense. According to the military, the density of human soldiers will decrease and give way to robotic and autonomous combat vehicles.

“Technology will ensure that the British army is ready to fight and win when the nation and our allies are threatened. The British army, with our allies and industrial partners, is in a good position to accelerate in the technologically possible future,” the statement said.

RAS is a robotics and autonomous systems [RAS] program developed by British military engineers. In the future, the RAS must mitigate risks by protecting the lives of soldiers, as well as develop robotic command, control, communications, computer information/intelligence, surveillance, and intelligence [C4ISR] systems.

Under the RAS, the British Ministry of Defense is developing the Human-Machine Teaming [HMT] project. The program aims to produce devices to help the British Army headquarters by reducing decision-making time, based on complex calculations and algorithms that analyze military action. British MoD says the HMT will still remain under human control, citing the management of drones.

This innovative experiment, known as the Theseus Project, will determine which tasks in the decisive “last mile” of the battlefield can be automated. This technology will be used to transform the army of the future. The Theseus project will build self-propelled air or ground platforms for the supply of ammunition, including ammunition, materials, food, and fuel.

A year ago, Nuneaton-based Horiba Mira demonstrated its autonomous ground and air platforms for vehicles. This included an unmanned aerial vehicle [drone] loaded with ammunition boxes and dropped off at some distance, and a ground platform loaded by soldiers with a fake evacuation of casualties, which was then sent back to the command post