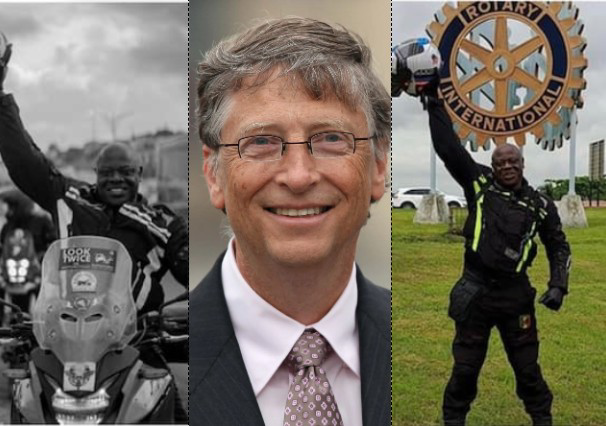 Bill Gates, billionaire businessman and co-founder of Microsoft, has praised the effort of Kunle Adeyanju, the tourist who rode a bike from London to Lagos in a campaign to fight polio.

Adeyanju has been in the news since April when he initiated his London-to-Lagos bike ride to raise funds for Rotary International’s fight against polio, which is a threat in Africa.

The arduous journey forced him through spine-chilling ordeals as he narrated how he heard “different voices” amid the shifting sands of the Sahara Desert.

He also recounted a near-death experience due to thirst in the hot, calcifying heat of Mauritania, and how Cote D’Ivoire authorities turned him back after riding to the country’s border.

After the 44-day long journey, he arrived in Nigeria on Sunday and was welcomed by a crowd of people at the Seme border of the country.

Reacting to the feat, Gates, in a tweet on his verified Twitter page on Tuesday evening, described the journey of the Nigerian as “incredible.”

Through Bill and Melinda Gates Foundation, the billionaire has been one of the leading contributors to the eradication of polio in Nigeria.

In September 2020, Gates told TheCable about his plans to “get rid of vaccine-derived polio in Nigeria and other countries in Africa.”