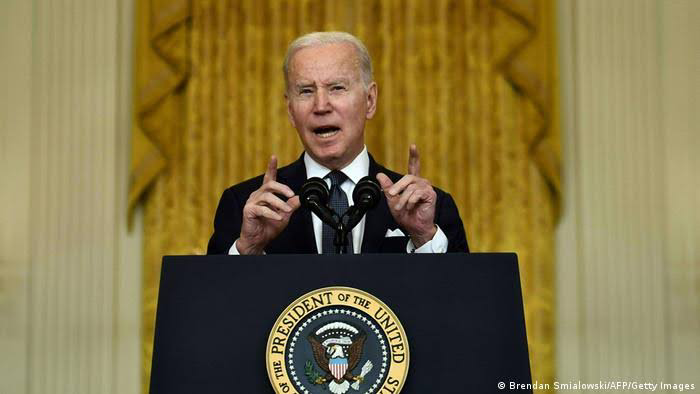 “Putin is the aggressor,” Biden said in remarks at the White House. “Putin chose this war and now he and his country will bear the consequences.”

Biden said that the U.S. will block four additional Russian banks, including VTB, the country’s second largest bank, from having access to the U.S. financial system, and limit Russia’s ability to import western technology. He said the actions will hamper Russia’s ability to do business “in dollars, pounds, euros and yen.”

“The U.S. stands up to bullies,” Biden said. “We stand up to freedom.”

Biden repeated that U.S. troops will not be deployed to Ukraine, but reiterated that he’s sent “thousands of additional forces to Germany and Poland” to protect NATO’s eastern flank. Biden said that on Friday NATO will convene a summit and that “we’ll be there to bring together the leaders of 30 allied nations and close partners to affirm our solidarity.”Sponsor Message

“This is a dangerous moment for all of Europe,” Biden said. “If we don’t move against him now with these significant sanctions, Biden said, speaking of Putin, “he will be in Poland,” he predicted.

Biden vowed that he “will do everything in my power to alleviate the pain” that Americans are feeling as the gas pump as oil prices spike. But, he said, “this aggression cannot go unanswered.”

Biden said that the U.S. and its allies would not take the step of keeping Russia from using the SWIFT system for global banking transactions because Europe did not want to but he said it would be held in reserve.

Putin, he said, “has much larger ambitions than Ukraine,” adding that he thinks the Russian president wants to reestablish the Soviet Union. “If we don’t move against him now with these significant sanctions,” Biden said, “he will be emboldened.”

The White House has been saying for weeks that its threat of sanctions were aimed at deterring an invasion. But on Thursday, Biden said the sanctions were not expected to prevent one. Instead, he said it would take time to have the intended impact: weakening the country’s economy.Sponsor Message

Biden also again warned Putin against conducting cyberattacks against the U.S. companies and infrastructure, vowing “we are prepared to respond.”

Biden said Putin ‘will be a pariah on the international stage’

Biden said he spoke Wednesday night with Ukrainian President Volodymyr Zelenskyy and promised him the U.S. would provide humanitarian aid. Biden said Putin has “unleased a great pain” on the Ukrainian people.

The Treasury Department said in a statement that on a daily basis, Russian financial institutions conduct about $46 billion worth of foreign exchange transactions globally, 80 percent of which are in U.S. dollars. “The vast majority of those transactions will now be disrupted,” according to the statement. “The Russian financial institutions subject to today’s action can no longer benefit from the remarkable reach, efficiency, and security of the U.S. financial system.”

Payments for energy will be allowed, the Treasury Department confirmed, as well as payments for agricultural and medical commodities.

Six Russian individuals were added to the sanctions list – two banking executives and four family members of other officials deemed close to Putin.

The Commerce Department on Thursday unveiled its new export controls for Russia, saying that semiconductors, computers, telecommunications, information security equipment, lasers and sensors would be subject to the new bans. In addition, 49 Russian military end users were added to a control list.

The department said similar measures would be taken by the EU, Japan, Australia, United Kingdom, Canada and New Zealand, and that more countries were expected to join.

Biden has warned that these were the first “tranche” of sanctions and that the administration would ratchet up the response based on Russia’s next steps. Senior administration officials say the the group of Russian elites and their family members who are being sanctioned have “shared in the corrupt gains of the Kremlin, and they will now share in the pain.”

Meanwhile, the administration and bipartisan members of Congress have been discussing providing additional assistance to Ukraine and allies and partners.