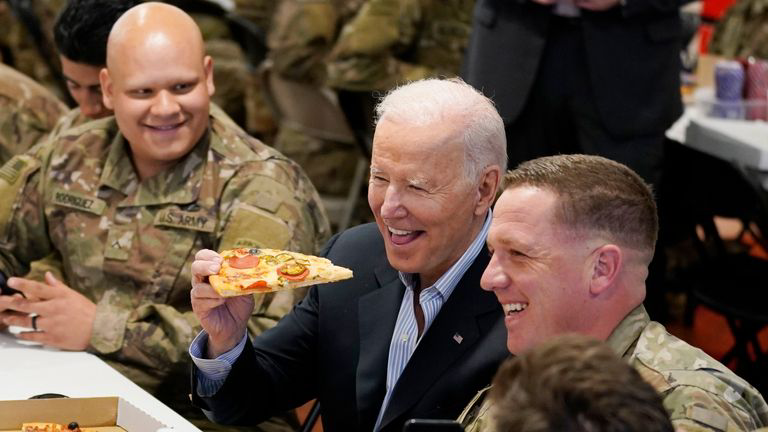 President Joe Biden took a break from meeting with world leaders to visit U.S. troops from the 82nd Airborne Division in Poland on Friday afternoon.

While there, the president thanked many soldiers individually for their service, and also took time to share some pizza and selfie ops. The troops are currently in the Polish city of Rzeszów, approx 50 miles from the Ukrainian border.

He then iterated to the troops stationed in Poland, “it’s not hyperbole to suggest, you are the finest fighting force in the world in the history of the world.’

While the troops savoured on the pizza bought by the US president, he asked: “Well if you’re starting to eat. I’m gonna sit down and have something to eat. Is that all right” He then ate the pizza with the soldiers and also later spoke to each for about several minutes. Biden in his remarks thanked Poland’s President Andrzej Duda for the coordinated efforts at sheltering the Ukrainian refugees fleeing the war atrocities. He is scheduled to hold a bilateral meeting with President Duda scheduled for Saturday later where the two longtime counterparts will discuss the humanitarian crisis and human rights issue that Russia’s unjustified and unprovoked war has unleashed on Ukraine.