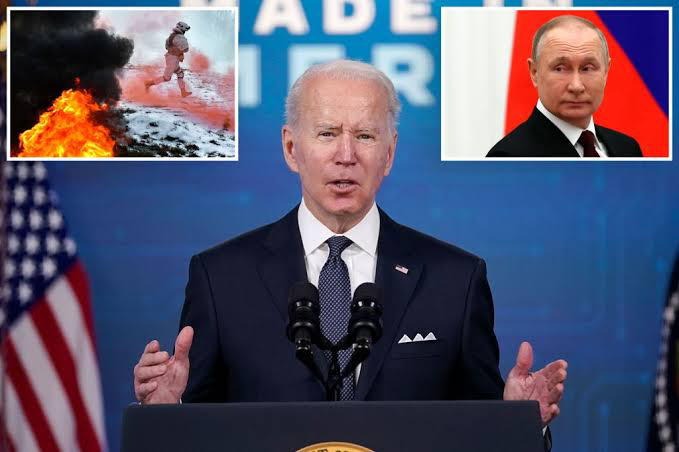 President Joe Biden on Wednesday said Russian President Vladimir Putin “is a war criminal” for attacking Ukraine and announced an additional $800 million in security assistance including weapons to take down Russian planes and tanks.

In an exchange with a reporter at the White House, Biden said, “Oh I think he is a war criminal,” after initially responding with a “no” to a question about whether he was ready to call Putin that.

That is the first time Biden has publicly branded Putin with that phrase. Last week, during a trip to Poland, Vice President Harris said Russia should “absolutely” be investigated for potential war crimes.

White House press secretary Jen Psaki later said Biden was speaking from his heart, noting there is a separate legal process to determine whether Putin has violated international law and committed war crimes, and that that process currently is underway at the State Department.

Earlier in the day, Biden said the United States has offered Ukraine $1 billion in security aid, addressing Ukrainian President Volodymyr Zelenskiy’s urgent appeal to the U.S. Congress for military help to fend off the Russian invasion. The U.S. will continue to give Ukraine weapons to fight and defend themselves, offer humanitarian relief and support Ukraine’s economy with additional financial assistance, he added.

“This new package on its own is going to provide unprecedented assistance to Ukraine, and includes 800 anti-aircraft systems,” Biden said, to halt attacks on Ukrainians by Russian planes and helicopters.

“More will be coming as we source additional stocks of equipment that … we are ready to transfer,” he said.

U.S. President Joe Biden is flanked by Secretary of State Antony Blinken and Deputy Secretary of Defense Kathleen Hicks as he speaks about assistance the U.S. government is providing to Ukraine amid Russia’s invasion of the neighboring country, before signing an executive order on the aide in the Eisenhower Office Building’s South Court Auditorium at the White House in Washington, U.S., March 16, 2022.

The new funds will come from a spending bill Biden signed into law that includes $13.6 billion in new aid to Ukraine.

In his address to Congress, Zelenskiy compared the attacks in Ukraine to the Japanese attack on Pearl Harbor that pulled the United States into World War Two, and begged lawmakers, and Biden directly, for more help.

“This is a terror that Europe has not seen for 80 years, and we are asking for our life, for an answer to this terror from the whole world. Is this a lot to ask for? To create a no-fly zone over Ukraine to save people?” Zelenskiy asked through an interpreter.

“If this is too much to ask, we offer an alternative,” he said. “You know what kind of defense systems we need,” adding that he knows the United States has them.

Biden has referred to the creation of a no-fly zone over Ukraine as “World War Three,” and the Pentagon has refused requests to send fighter jets to Ukraine.

Earlier on Wednesday, Russia and Ukraine both emphasized newfound scope for compromise as peace talks were set to resume three weeks into a Russian assault that has so far failed to topple the Ukrainian government.

On Tuesday, the White House said Biden will travel to Brussels for a March 24 NATO summit on Russia’s invasion of Ukraine, which Moscow terms a “special military operation” to disarm and “denazify” its neighbor.

Biden has ratcheted up sanctions imposed on Russia in recent days. He has called for a suspension of Russia’s trading status that affords its exported products lower tariffs in the international arena and announced a ban on Russian oil and other energy imports.

PREVIOUS POST Air Peace breaks silence on ‘plans’ to increase ticket fare to N120,000
NEXT POST WHO says global rise in COVID cases is ‘tip of the iceberg’