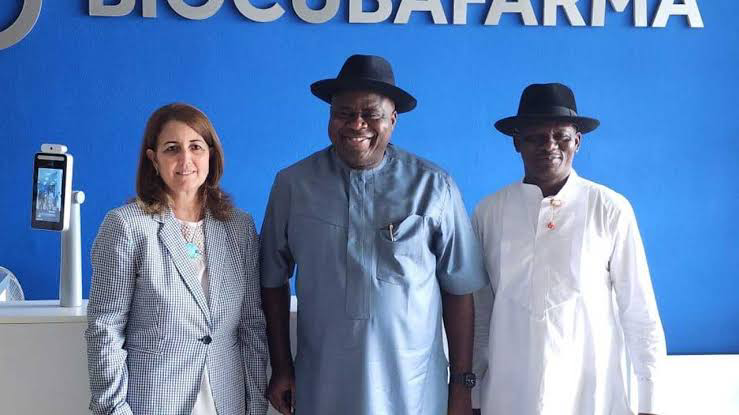 Bayelsa State Government has signed a Memorandum of Understanding (MoU) with BioCubaFarma Consortium of the Republic of Cuba for the establishment of vaccines and pharmaceuticals production plant in the state.

This deal was the fall-out of a 3-day investment visit to Cuba led by Senator Douye Diri, Governor of Bayelsa State.

At the ceremony in Havana, Cuban capital, Commissioner for Health in Bayelsa State, Pabara Newton Igwele and Permanent Secretary, Ministry of Trade, Industry and Investments, Patience Ranami Abah, signed for the government while the First Vice President of BioCubaFarma, Dr. Mayda Mauri Pérez signed for the Consortium.

A statement by the Director, New Media to the Bayelsa State Governor, Dr. Kola Oredipe, indicated that the partnership was in furtherance to an earlier bilateral agreement signed between the Nigerian Government and that of Cuba on scientific cooperation, technology transfer, academic collaboration and the co-production of vaccines and other pharmacological products in the country.

The Republic of Cuba recently joined the league of nations that had gained international recognition for its medical breakthroughs and advancements.

At the signing ceremony witnessed by Governor Douye Diri, the Commissioner for Health, Dr. Igwele, said the partnership deal marked a milestone in the quest of the government to attract investments into the State.

“This is a good development for us in Bayelsa State. The vaccines and other pharmaceutical products are in high demand in Nigeria and beyond. With the centre here, Bayelsa can serve other states and nations in the West African sub-region. In the next few months, the technical teams from both sides will work out further details of the agreement with the technical teams from both end,” he stated.

The Health Commissioner said the vaccines and pharmaceuticals production centre would provide job opportunities, build expertise of young Bayelsans and also ensure technology transfer for sustainability of the plant.

PREVIOUS POST Ekweremadu and Wife denied bail again, remanded in Prison till August
NEXT POST UK court rules in favour of Ekweremadu, says donor is not a minor