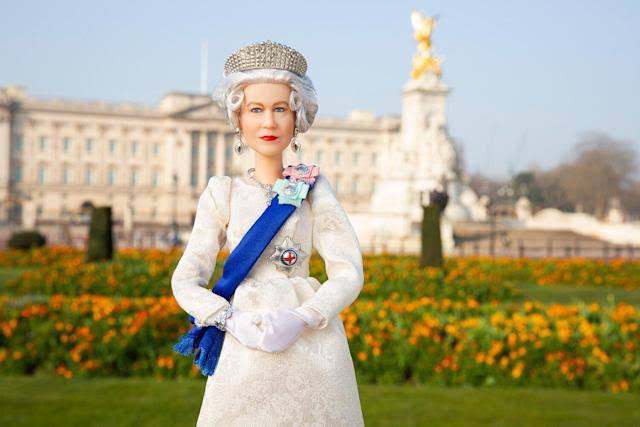 Barbie is officially releasing a Queen Elizabeth II doll to celebrate both the queen’s 96th birthday and her Platinum Jubilee, which marks 70 years on the throne.

The Queen Elizabeth II Barbie doll, part of Barbie’s Tribute Collection series, will go on sale Thursday, which is April 21, the queen’s birthday.It marks the first Barbie made in Queen Elizabeth’s likeness, according to Mattel.

The stunning Barbie doll is a fitting tribute for a queen. Inspired by the queen’s iconic looks throughout the years, the doll is adorned in an elegant ivory gown and wears Queen Elizabeth II’s recognizable blue ribbon, which even features mini versions of the Royal Family Orders, portraits of kings and queens worn on silk ribbons by royal women. An ornate crown — based on Queen Mary’s fringe tiara — and matching accessories complete the look, including the pink ribbon given to the queen by her father George VI.

“The gown is not a copy of any one dress she wears, but rather a gown inspired by the style and color of gown she’s favored in royal portraits of herself for the past several years,” shares Robert Best, a senior director of Barbie design. “If you look at those portraits or how she dresses for important events, she very much has a signature style and look — always a very simple design in white or ivory, which makes sense given that she must then wear all the accompanying jewelry and sash as befits her rank.”

In celebration of the release, the doll also visited Buckingham Palace.The newest doll in the Barbie line-up honors and celebrates Queen Elizabeth II’s legacy, which includes 70 years of public service and an unwavering devotion to global humanitarian efforts.

“It’s incredibly important for children to see female leaders who have impacted history in their dolls, from Frida Kahlo to Amelia Earhart and now the queen,” shares Kate Williams, a historian, professor and author of Our Queen Elizabeth: Her Extraordinary Life from the Crown to the Corgis. “It brings home the importance of women’s contributions to the world, the impact of women as leaders, creators and pioneers and the fact that women’s achievements are important and should be celebrated.”

The impact of the queen’s reign will forever be felt, especially with young women. According to Williams, the Platinum Jubilee, “is a moment to evaluate how much Britain and the world has changed in her reign.”

“In 1952, when she came to the throne, women were not encouraged to work and politicians expressed doubts about a young female monarch — but she showed them wrong, proved herself an adept leader and diplomat,” Kate Williams, author of “Our Queen Elizabeth,” a picture book on the queen, said in a statement provided by Mattel. “As Her Majesty celebrates this milestone jubilee, it is wonderful to see an iconic brand like Barbie share important historical female figures impact as leaders, creators and pioneers to new generations.Her 70-year reign makes her the longest-ruling monarch in Britain’s history.

“Barbie is an icon,” Williams adds, “timeless, inspiring, recognized around the world — and the queen is an icon, too. They are two of the world’s most recognizable women and now they are joined together in this doll.”

Launched in 2021, the Barbie Tribute Series honors trailblazing women whose forward thinking and revolutionary visions forever changed the world for the better. The series kicked off by paying tribute to entertainment icon Lucille Ball.

Barbie has long made conscious efforts to encourage and inspire young girls everywhere, showing them they can be anything they want to be. The brand most recently sent Astronaut Barbie on her first space mission to encourage young girls to consider careers related to space exploration.

For the prospective collector, The Queen Elizabeth II Barbie doll’s packaging was also given the regal touch with incredible attention to detail and a little inspiration from across the pond. Inspired by rooms found in Buckingham Palace, the physical box embodies the same grand nature as the doll with ornate gold detailing, a crest-shaped logo and a badge commemorating the queen’s 70th anniversary.

Those who remove the doll from the box will find a certificate of authenticity and a doll stand inside. The doll’s “Made to Move” body has a wide range of movement with more than dozen points of articulation, allowing collectors to pose the queen in their royal position of choice.

The Queen Elizabeth II Barbie doll will retail for $75 and will be sold on Mattel’s website as well as retailers including Amazon, Target and Walmart

PREVIOUS POST Queen Elizabeth Celebrates Her 96th Birthday with Her Most Majestic Photo Ever!
NEXT POST Coinbase is building its own social network for NFTs