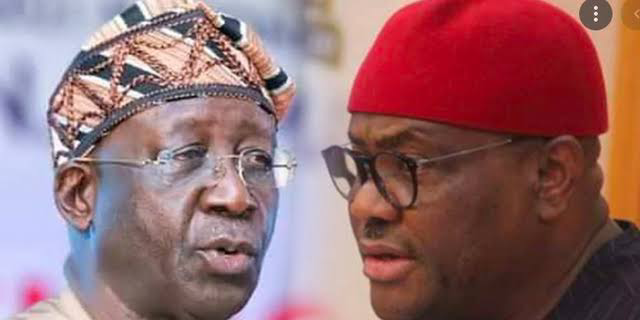 The Rivers State Governor, Nyesom Wike, has alleged that one of the reasons the National Chairman of the Peoples Democratic Party, Senator Iyorcha Ayu, does not want to vacate his seat was that he is scheming for a role if former Vice President Atiku Abubakar wins the 2023 presidential election.

Recall that Wike and other Southern leaders in the PDP had been calling for the resignation of Ayu as national chairman.

Their contention has been that both the presidential candidate and national chairman of the party cannot be from the same zone: North.

However, Ayu has refused the call for him to resign.

Wike, who spoke in a televised interview on Friday, said Ayu believes that remaining as national chairman of the PDP places him in a pole position to emerge as the SGF if Abubakar win.

He also dared the party to suspend him as being peddled on the social media.

He dared the party to call a meeting of the National Executive Committee to pronounce his suspension.

He said: “Let them call NEC today to suspend me.

On whether other parties are wooing him, Wike said: “So many parties talking to me.

“Our presidential candidate, does he not talk to other parties?

“Who does not want to talk to a pretty girl?”

Wike said what they are asking of Ayu was not his sack but for him to resign, adding that the PDP had boxed itself into a corner with the president crisis.

He said: “We have boxed ourselves into a corner now.

“We broke the constitution of the party and something must give way for us to move forward.

It is a simple thing: make sacrifice.

“You are resigning because we have problem.

“You are the one that can salvage the problem.

“But because he has his eyes on becoming SGF, he doesn’t want to leave.”