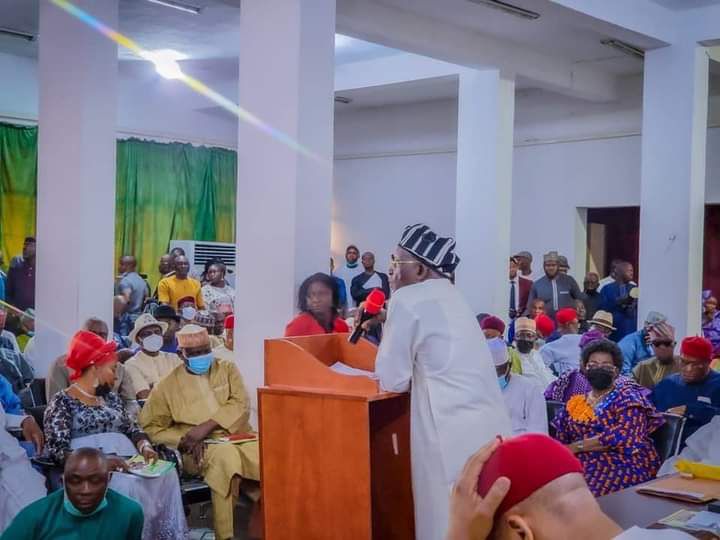 Iyorchia Ayu, national chairman of the Peoples Democratic Party (PDP), has asked party members to refrain from “attacking” each other.

Ayu gave the advice while addressing a joint meeting of the board of trustees (BoT) and national executive committee (NEC) of the party on Wednesday at the PDP headquarters in Abuja.

The PDP national chairman said “attacks” are a distraction for the party, adding that the focus now should be on winning elections.

Both governors have been trading insults and accusations and the verbal brawl took a new dimension after Wike criticised Philip Shaibu, Edo deputy governor, for “daring to threaten” the PDP.

Shaibu had appeared on a Channels Television programme where he said he and Obaseki may leave the PDP if the party continues to treat them as outsiders.

Responding to Shaibu’s comment, Wike described him as an “ingrate”, adding that the PDP gave Obaseki and his deputy the party’s ticket when they were denied the same by the All Progressives Congress (APC) for the 2020 Edo governorship election.

In response, Obaseki defended his deputy and said Edo does not “accept political bullies and overlords”.

The Rivers governor fired back on Monday, saying he regrets backing Obaseki in the governorship election.

“I am calling on every single member of the PDP family to put their differences aside. We are not out to fight against ourselves; our goal is unite the party, go out as we used to do, win elections as we used to do,” he said.

“If there are any issues, we have different organs of the party to resolve party differences.”

Meanwhile, Wike, who was present at the meeting, maintained a straight face while the national chairman was making the remarks.