Atiku, Okowa, Ayu others receive Shekarau back to PDP 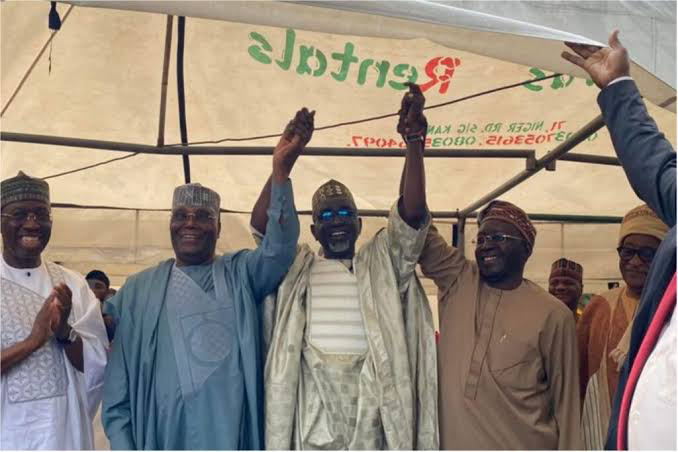 The Peoples Democratic Party, PDP, presidential candidate, Atiku Abubakar, and other heavyweights, on Monday, defied a downpour in Kano to receive former governor, Senator Ibrahim Shekarau back to the party.

Other chieftains include former governor of Jigawa State, Sule Lamido; former Governor of Kaduna State, Ahmed Makarfi among others.

Despite the heavy downpour, thousand of party faithful troop en masse to the Mundubawa residence of Shekarau.

Shekarau defected to the party after parting ways with the former governor of Kano State, Senator Rabiu Kwankwaso over what he described as “betrayal” on the part of the New Nigeria People’s Party, NNPP presidential candidate.

Recall that Senator Shekarau (Kano Central) dumped the ruling All Progressive Congress (APC) in May to join NNPP, where he was received by its presidential candidate, Kwankwaso.

He accused the APC in Kano of being undemocratic, saying “as the party belonged to Governor, Abdullahi Ganduje, his wife and the state Chairman of the party Abdullahi Abbas.”

However, he decided to leave the NNPP for the PDP due to the party’s failure to meet with some said sets of agreements he had with them.

Shekarau declared his intention to join the PDP at his residence in Kano on Monday, amidst cheering by his supporters and those of his new party.

Shekarau said he left the NNPP for refusing to implement the terms of agreement he had reached with the party in May, when he dumped APC for NNPP.

While delivering his speech at the defection ceremony held at his residence, Malam Shekarau declared that he and his supporters have joined PDP.

“I and my followers have today dump NNPP for PDP,” he declared.