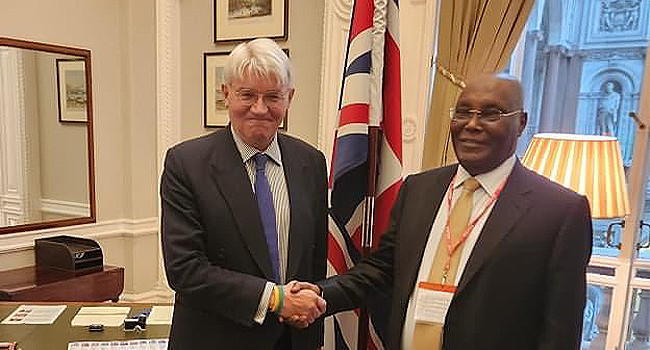 The presidential candidate of the Peoples Democratic Party (PDP), Atiku Abubakar, on Tuesday, met with members of the United Kingdom Parliament to discuss his solutions to issues that could be of concern to the European country if he is elected president next month.

“I just concluded successful meetings with The Right Hon. Andrew Mitchell MP—Minister for Development and Africa in the Foreign, Commonwealth and Development Office (FCDO), amongst other key senior UK government officials,” he tweeted at 6:13 pm.

“It was an auspicious occasion to share my vision for Nigeria encapsulated in the Unity SEED with them. It is a vision United by Security, Economy, Education and Devolution (of Powers).

“I solicited their partnership and I am encouraged by the UK government’s strong interest in helping Nigeria RECOVER every facet of its life.”

“We met with about seven departmental heads and directors of government agencies in the UK and it was a robust meeting and we had very robust discussions on the economy, defence, and security.

“We also had a lot of talk on immigration issues. It was a very great meeting. It was a very interesting, intriguing discussion with the British government today,” he said.

Melaye insisted that the PDP candidate has been busy engaging Nigerians, especially those who have the capacity to vote.

“Not that he’s not interacting globally. He’s visited presidents across the globe, more than any other presidential candidate,” he said.

“In the last two months, Atiku Abubakar has visited about seven African presidents, especially in the ECOWAS region, to interact with them and to discuss the issue of insecurity across the region and how to tackle it.”

According to him, no other presidential candidate has achieved that.