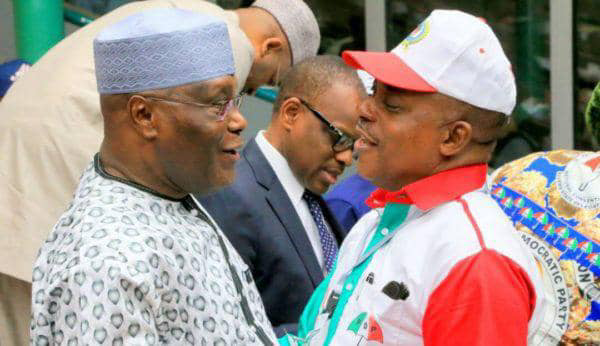 Saraki and Anyim — who both contested the party’s presidential ticket but lost to Abubakar — were given the roles of “special envoy” and “special adviser”, respectively.

Also, Uche Secondus, a former national chairman of the PDP, was appointed as technical adviser.

In a statement on Monday, Paul Ibe, spokesman to the PDP presidential candidate, said the appointments “take immediate effect”.

“Atiku Abubakar charged the appointees to use their vast political experiences in ensuring that the PDP presidential campaign records resounding success in the 2023 election,” Ibe said.

The development comes amid crisis in the PDP over calls for the removal of Iyorchia Ayu, national chairman of the party, who took over after Secondus was removed.

Among those at the forefront of the call for Ayu’s removal is Nyesom Wike, governor of Rivers — Wike and his allies are insisting that the party’s chairman and presidential candidate cannot be from the same region.

However, while Ayu has said he will remain in office until his tenure ends, Abubakar has said he cannot force the national chairman to step down, adding that Ayu can only be removed if the party’s constitution is amended.

Meanwhile, in August 2022, Wike had boasted about removing Secondus from office as PDP chairman over the latter’s alleged poor performance.

In response, Secondus had said the Rivers governor lacks the power to “crush” anyone.